Every once in a while[1], someone has a very good day. 145 Islamic State demons sat down to have their Iftar dinner and before they knew what was really going on, 45 dropped deader than a doornail. This happened in Iraq. I suspect Syrian Rebels or the Kurds snuck in again and added something, something to the meal for added enjoyment. It’s a pity they didn’t stick around to mow down those who didn’t die over their dinner or shortly thereafter. Couldn’t happen to a nicer bunch of psychotic barbarians. Somehow I doubt they are on their way to paradise – unless you like hell. And Satan laughed with delight. 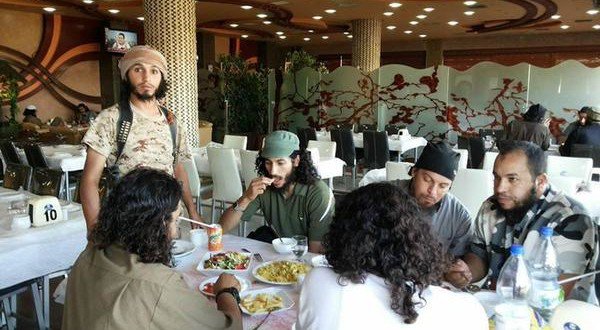 ISIS militants are known for their extreme brutality across the globe, but recently they got a taste of their own medicine.

Iraqi state media is reporting that 45 ISIS militants died after eating poisoned food during an Iftar dinner[3], which is celebrated during the annual Ramadan fasting.

“According to the Kurdish party spokesman, 145 ISIS fighters participated in the iftar meal, and 45 of them died a short time later.”

Haaretz also noted the attack took place in Mosul, Iraq, which was been controlled[5] by ISIS for more than a year.

Whether the poisonings were intended or by accident has yet to be confirmed. However, The Mirror reported[6] last November an attack involved members of the Syrian Free Army infiltrating ISIS with poison.

Rebel soldiers posed as chefs and poisoned dozens of ISIS militants at the Fath El-Sahel camp in Syria. Though, multiple outlets have since attempted to dispute[7] the legitimacy of the original report.

Meanwhile, President Obama has finally outlined[8] what his administration believes is the proper strategy to defeat ISIS, saying:

“The strong consensus is that in order for us to succeed long-term in this fight against [ISIS], we have to develop local security forces that can sustain progress. It is not enough for us to simply send in American troops to temporarily set back organizations like [ISIS], but then as soon as we leave see that void filled again by extremists.”

The President also added that U.S.-led coalition forces will “ultimately prevail” in the fight against ISIS.

The President’s remarks came after he met with more than 30 top defense officials, spanning multiple branches of the military as well as intelligence agencies.

Obama all but came out and said that the US was not capable of defeating the Islamic State. We have such a craven, loser for a leader. I really believe he’s rooting for the Islamic State and the Caliphate. The only way to beat ISIS is with massive force. Wipe them from the face of the earth and salt the ground they stood on. I’ll hold that happy daydream and now reminisce on the Iftar dinner where 45 terrorist scum bags breathed their last – no more raping, murdering and pillaging for you asshats. Good times. Now that’s righteous justice.