Bush Vs. Obama on Iraq

Most people think George W. Bush’s big mistake in Iraq was not finding weapons of mass destruction in Iraq. 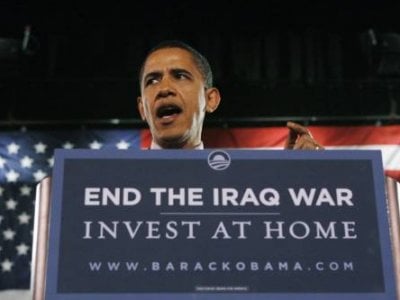 Of course, we did find weapons of mass destruction in Iraq. They just weren’t the ones we were looking for when we went in. Saddam had old WMD’s stockpiled that have now fallen into the hands of ISIS[2]. Saddam also had everything he needed in place to start his WMD program up again on short notice[3]. Additionally, many Democrats who looked at the same intelligence Bush did also believed that Saddam Hussein had an active WMD program[4]. For example, here’s Hillary Clinton talking about WMD’s in Iraq,

“In the four years since the inspectors left, intelligence reports show that Saddam Hussein has worked to rebuild his chemical and biological weapons stock, his missile delivery capability, and his nuclear program. He has also given aid, comfort, and sanctuary to terrorists, including Al Qaeda members, though there is apparently no evidence of his involvement in the terrible events of September 11, 2001. It is clear, however, that if left unchecked, Saddam Hussein will continue to increase his capacity to wage biological and chemical warfare, and will keep trying to develop nuclear weapons. Should he succeed in that endeavor, he could alter the political and security landscape of the Middle East, which as we know all too well affects American security.” – Hillary Clinton, October 10, 2002

This is where most of the debate about going into Iraq begins and ends, but it’s not where Bush made his real mistake. Despite the fact that Saddam Hussein didn’t have an active weapons program, there were a lot of reasons invading Iraq made sense in a post 9/11 world[5].

However, all of this sidesteps the real mistake Bush made. It was something I brought up in an interview with Donald Rumsfeld[6] back in March of 2011,

As someone who’s supported the war from beginning all the way to the present, there’s one thing I found particularly disappointing and puzzling. In the run up to the war, the Bush Administration really didn’t do much to prepare the public for the idea that we’d be spending blood and treasure fighting an insurgency there for years to come. How did that come to be the case?

Well, first I would say that the intelligence assessment did not suggest that would be the case. As a result, the people involved did not raise that to the public as a high likelihood. George Tenet, in his book, acknowledges that fact and says that had they thought that was a high probability, they would have presented it as a serious probability and put it in the executive summary to make sure that it was considered and evaluated.

If one goes to my Web site: Rumsfeld.com: and looks up the memo that since then is described as the: Parade of Horribles…I sat down before the war and wrote down a series of things that could be serious problems. One of them I included would be not to find weapons of mass destruction stockpiled. I put down the fact that the war could last eight to 10 years because of exactly what you’ve said. There’s a list of about 20 or 30 other things that people can go and see. I sent it to the President and sent it to the members of the National Security Council – so people were thinking about those problems. They just were not considered high probability.

The thing that REALLY turned Americans against the war wasn’t that we didn’t find WMD’s; it was that American troops ended up policing Iraq for years and many of them died in the process. The American people were never prepared for that possibility because the Bush Administration didn’t think there was much of a chance it was going to happen. Of course, if the Bush Administration had realized that was a serious possibility, it’s doubtful that we would have invaded in the first place.

Unfortunately, like the old saying goes, in for a penny, in for a pound. Once we invaded, removed Saddam, and had American troops holding the country together, we NEEDED to finish the job because the consequences of failure were potentially even bigger than the blood and treasure we were spending there. Despite all the difficulties we had in Iraq, George W. Bush did his part to pacify Iraq with the surge. When he left office, not only did Al-Qaeda control no territory in Iraq, there were fewer allied troops killed in action in that country than there have been in ANY YEAR SINCE in Afghanistan. Given how many Americans had been dying in Iraq, that says a lot about how successful the surge turned out to be.

Still, Bush was in a difficult position because Obama was campaigning on setting a timeline in Iraq, which was an awful military strategy that jeopardized everything we’d accomplished in that country. Unfortunately, because the American people were understandably sick of the war by the end of Bush’s term, that dumb military strategy was also politically popular. So, Bush made the best of a bad situation and put his own timeline in place in hopes that Obama would at least delay that long before he pulled all of our combat troops out of Iraq.

Then, Obama took over as Commander-in-Chief in a war that had essentially been won. Joe Biden even called Iraq, “one of the great achievements of this administration.” That seemed a bit premature given that Obama pulled ALL of our troops out of Iraq against the advice of America’s generals[7]. Obama didn’t even bother to get a status of forces agreement in Iraq; so unlike Germany, Japan and South Korea, no American troops remained behind. Iraq didn’t need American troops there to police the country any longer, but they could have done a great deal of good by training Iraqi forces, helping them with intelligence and strategy and using drones to kill enemy forces. If they had been there, odds are ISIS would have been stopped cold instead of running wild across the country.

…Which brings us to the current situation. Iraq’s military is in a shambles, ISIS is surging across Iraq, Iran is getting involved, and the whole country appears to be collapsing into civil war. What should we do?

We definitely shouldn’t put any more American troops in harm’s way on the ground. Our troops already fought and won that war once and asking them to go back in because a politician blundered away their sacrifices is unconscionable. So, can we send arms to the government of Iraq? Soldiers to train their troops? Maybe even air support? Given the blood and treasure we’ve spent there, if it can make a difference, those things are all worth doing. However, this late in the game, it may be too little, too late. It’s entirely possible that no matter what we do at this point, Iraq may be gripped with civil war, become a failed state, or turn into a terrorist haven.

So for all of his mistakes, George W. Bush won Iraq while Barack Obama managed to lose the peace by playing political games instead of acting like a real Commander-in-Chief. What happens from here is impossible to say, but it’s apparent that the mistakes Barack Obama has made in Iraq may not be fixable.