Come back soon, daddy: Heartbreaking scene at Marine’s grave on Memorial Day with his son

I dare you not to cry over this one[1]. I know I wept. As I watched my friend, Debbie Lee, of Gold Star Moms[2] and America’s Mighty Warriors[3], on Fox News today, speaking so eloquently about the loss of her son and the fall of Ramadi, I got very angry and sad. Our boys and girls gave everything[4] so we might be free and rest easy. A little four year-old boy lost his daddy when he was eight months old. His father, a Marine, died tragically in a training exercise. His son runs to his headstone and hugs it, telling his daddy to come back soon. This is the very essence of Memorial Day when we remember and honor those past and present who make the ultimate sacrifice for our freedoms. 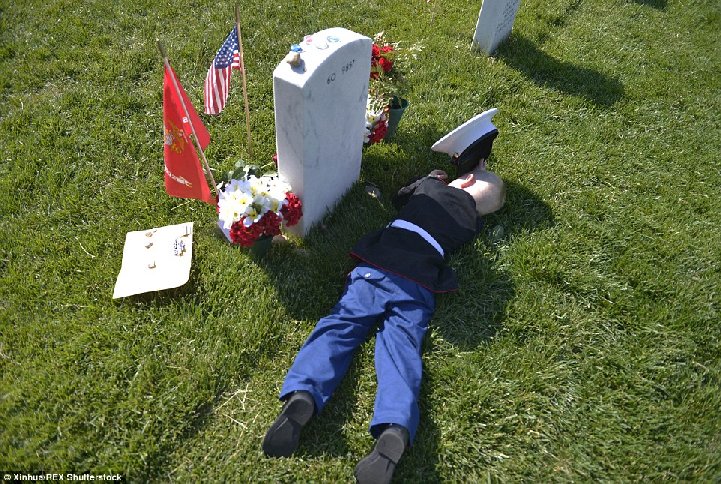 Christian Jacobs, 4, lies besides the tomb of his father at section 60 of Arlington
National Cemetery, outside Washington D.C. on Memorial Day.

He’s wearing the full formal Dress Blue uniform of a Marine Corps sergeant, and he has medals for service in Iraq and Afghanistan pinned to his chest.

But Christian Jacobs is not a Marine. He’s just four years old, standing at the grave of his father, Sgt Christopher James Jacob, on the day when America remembers its fallen heroes.

Christian Jacobs and his mother, Brittany Jacobs, visited the grave of Sgt Christopher James Jacobs, who served one tour in Afghanistan and one in Iraq, in Arlington National Cemetery on Monday.

For Memorial Day Commemorations, they came bearing flowers, cards and photographs, and Christian had lain on the ground next to his father’s tombstone, at section 60 of the cemetery.

Sgt. Jacobs died in 2011 in a training accident a Marine base in Twentynine Palms, California, when Christian was just eight months old.

‘He wants to know so much about his father. He likes coming here and he was excited about coming here. He said I get to go see my daddy, Brittany Jacobs told WBRC[5].

She added: ‘My daddy’s resting place is what he calls it so he was looking forward to coming out here. When he got here the first thing he did was run up and hug the stone, he didn’t want to leave it.’

Just hours before his death, he texted his wife Brittany Jacobs telling her that he had slept well the night before.

‘I love you guys,’ he sent as his last words to wife and young son.

‘We love you too, baby,’ replied his wife. Since his death, Brittany Jacobs has taken her son to visit her husband’s grave in Arlington National Cemetery.

This year Christian Jacobs wore a replica Marine Corps Dress Blue uniform with his father’s medals pinned to his chest as he and his mother made their way to the tombstone at section 60 of Arlington National Cemetery.

I will not put up pics and videos of Obama and his ceremonies honoring our fallen, because he has dishonored them so. All that was fought and bled for by our warriors has now been lost and Obama is simply flippant about it. But to this little boy and a wife who still grieves every day, there is nothing fleeting or easily rectified here. There is loss and anger that our boys and girls are not being allowed to fight and win… merely to bleed and die at the behest of a man who knows nothing of honor and duty. But Christian Jacobs knows his father is a hero and he loves him now and forever. That can’t be taken away from him. As we honor our heroes, take a moment to say a prayer for the littlest Marine and that America will once again be strengthened and saved by those who love her. 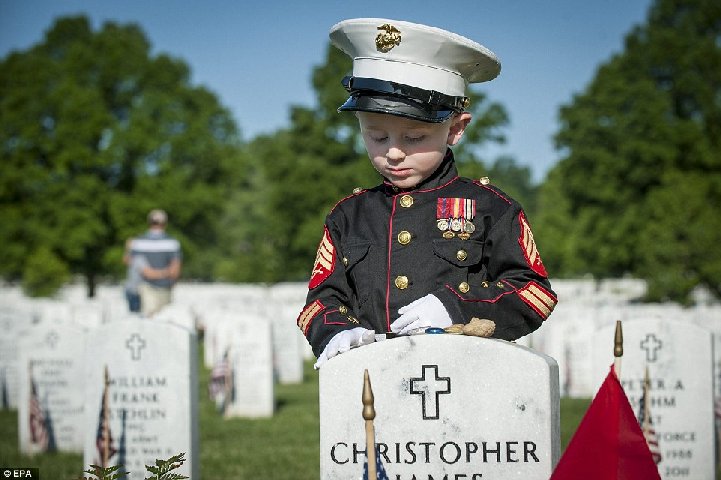 Christian Jacobs, four, of Hertford, North Carolina stands next to the headstone of his father,
Marine Sgt. Christopher Jacobs. 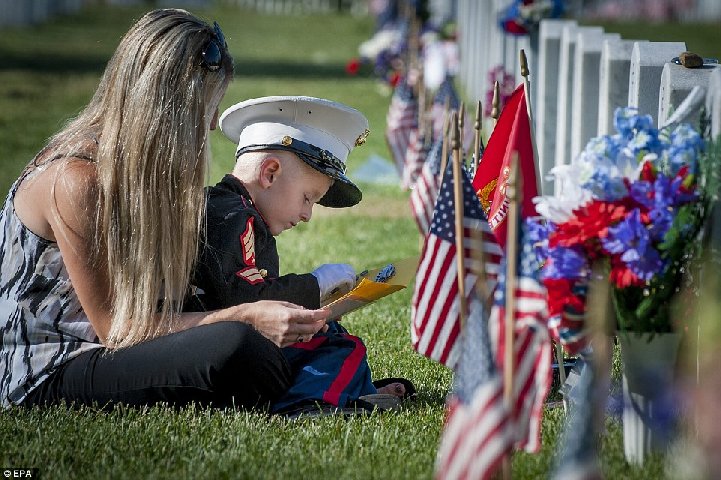 Brittany Jacobs of Hertford, North Carolina and her son, Christian sit at the headstone
of her husband, Sgt. Christopher Jacobs. 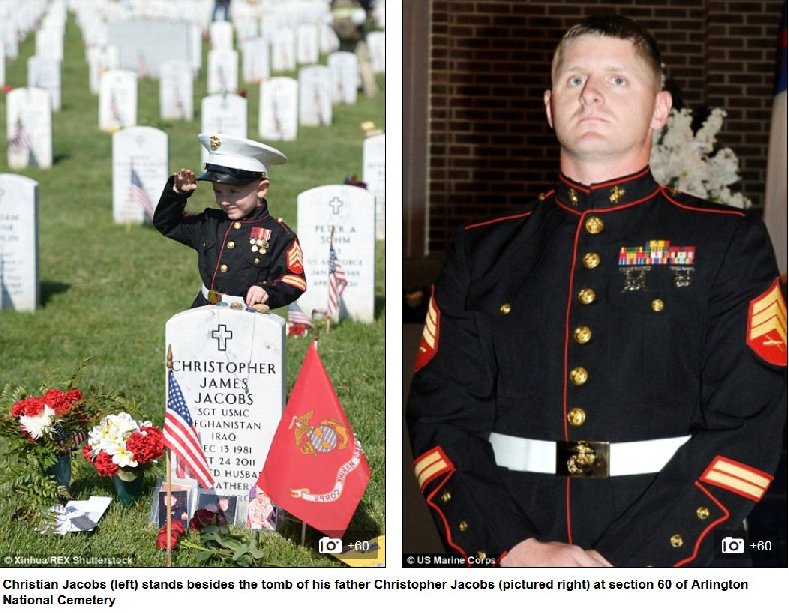 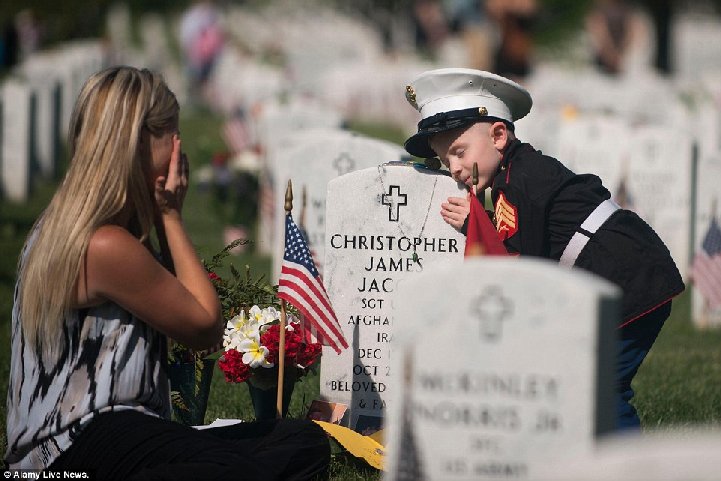