The grieving parents whose children were murdered by ISIS: Yazidi survivors tell how jihadis killed babies and raped mothers as they tried to escape [Video]

Children watched as 100’s of other little ones were murdered. ISIS would slit babies’ throats. The children watched their mothers and sisters being raped and ISIS is not picky… they raped the little boys too. What this article doesn’t point out is that they weren’t just murdered. They were beheaded, crucified, burned alive, stoned to death, buried alive, shot and hung. Many women and children who were sold as slaves and concubines were raped to death and discarded. They were forced to convert to Islam, but many Yazidis would rather die than submit and I could not agree more[1]. 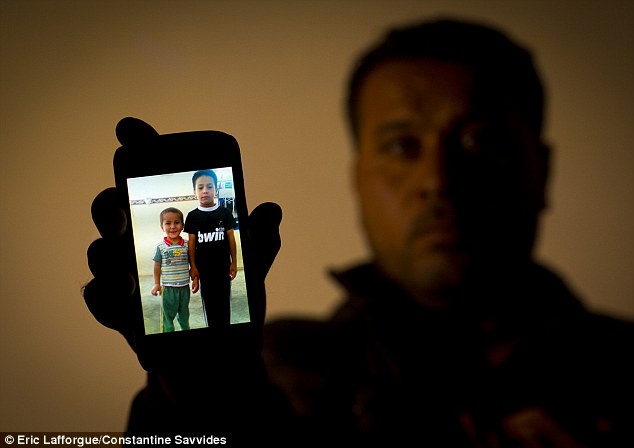 Tragic: Tahsyn shows a photo of his two little boys. It is all he has left of them after they were murdered by ISIS.

This time last year, Tahysn was a happily married father of two little boys aged three and four and lived close to his large, extended family in the village of Shangal in Iraq’s Nineveh province.

Now, home is a ramshackle refugee camp under the protection of Kurdish peshmerga fighters and he is grieving the loss of his wife and sons.

His story is far from unique. Like so many other Yazidis, his family were massacred by ISIS jihadis as they swept through northern Iraq in August. Like them, Tahysn has lost everything.

‘When the Daesh (a local slang term for ISIS) came to our village, I was not there but called my family and told them to leave. It was a big shock for everybody.

‘They managed to escape the village but on the way to Mount Sinjar, they met Daesh. All of them were killed.’

His eyes glistening with tears, he adds: ‘My older brother, my father, my mother, my wife and even my two kids were killed. All I have left of them is just one picture on my mobile phone.

‘The Daesh are just savages. They do not respect religion or humanity. They are not humans – even animals have more pity.’

The first inkling that his formerly peaceful existence was coming to an end arrived when Mosul fell to the jihadis on June 10.

As ISIS cut a swathe through the local population, forcing Christians to flee and killing anyone who resisted, the Yazidis watched uneasily.

Their unease was justified for less than two months after the fall of Mosul, the fanatics were bearing down on their own doorsteps.

The onslaught began on the 3rd August, when ISIS fighters surrounded the Kurdish town of Sinjar, which was once home to thousands of Yazidi families.

Many ran but more still were murdered as the jihadis advanced. Some were offered the chance to convert to Islam. Women were kidnapped and raped, as were children.

Others escaped to the top of Mount Sinjar, where, surrounded by jihadi forces, they faced death by starvation and exposure or at the hands of ISIS.

The savages of ISIS and the caliphate are cutting a bloody swathe across the Middle East. The US’ assistance has been almost non-existent. Instead we arm the enemy and are cozying up to Iran. We are watching a horrible game play out that doesn’t care if millions die and Obama is in the thick of it with Iran using ISIS as an excuse to accomplish the unthinkable. Meanwhile, those such as the Yazidis die or are taken as slaves. Many suffer fates far worse than death and the world does nothing. If the caliphate can touch these people, it can touch any of us. I hope someday it is not all of us living in refugee camps back in the dark ages, mourning the loss of all we have to radical Islam. The butchers of the caliphate are just getting warmed up.