Bravo, Sen. Cotton[1]! Well said and right on target. The release of Jihadists from Gitmo is simply appeasement for the Islamo-fascists and for Obama’s political base. Obama’s not notifying Congress… he’s violating the Constitution and he’s acting like a dictator. By dealing with terrorists for faux hostages and releasing the worst of the worst that were involved in the slaughter of almost 3,000 Americans on 9-11, Obama is outright aiding and abetting the enemy. Cotton knows it. He served in the military and he’s a patriot. He also recognizes bullcrap when it is slung using the ‘propaganda for terrorist recruitment’ ploy. 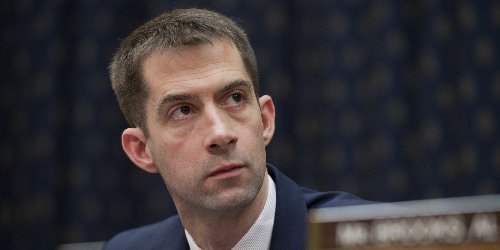 The newly appointed senator said the administration’s motivation to close Gitmo stems from Obama’s campaign promises, not any security reasons.

“They don’t attack us for what we do; they attack us for who we are,” Cotton said, noting that several terror attacks occurred before Gitmo opened. “It is not a security decision; it is a political decision based on a promise the president made during his campaign.”

“To say that it is a security decision based on propaganda value that our enemies get from it, is a pretext, a justified political decision,” he reiterated.

“In my opinion, the only problem with Guantanamo Bay is that there are too many empty beds and cells there right now. We should be sending more terrorists there for further interrogation to keep this country safe,” he continued as his passion increased. “As far as I’m concerned, every last one of them can rot in hell. But as long as they don’t do that, they can rot in Guantanamo Bay.”

McKeon is a moron. I’m telling you, he didn’t even know what the word ‘recidivism’ meant. Seriously? He is the Principal Deputy Under Secretary of Defense for Policy for the Department of Defense and he doesn’t know that recidivism refers to terrorists going back out there and committing terrorism? Previously, Mr. McKeon served as Deputy Assistant to the President, Executive Secretary of the National Security Council (NSC), and Chief of Staff for the National Security Council staff at the White House, a position he held from 2012-2014. And now you know one of the reasons we are so screwed up – we have idiots parading as defense and national security experts with fabulous titles and absolutely no military acumen in strategy or tactics. He’s highly educated in the ‘law’ and knows zippo about the military or national defense. He treats Gitmo as a legal issue, not a military issue and there lies the rub – terrorists only fear a strong military, they behead lawyers and laugh at them as the useful idiots they truly are.