Iraqi Christian militia moves to take the battle to ISIS: ‘This is our last stand’ [Video]

Four thousand Assyrian Christians[1] will move against Daesh (ISIS) to make their final stand to save Christianity in Iraq. I admire their bravery and perhaps with God’s blessing, they will prevail. But I have doubts – I know the US said it would take a minimum of ten thousand soldiers on the ground to even have a ghost of a chance at defeating ISIS. Having said that, Christian militias are fierce – they are fighting for their lives, the lives of their loved ones and their faith. If you are a Christian and you pray, pray for the Assyrians… they are fighting evil, barbaric monsters who will stop at nothing to control Iraq. 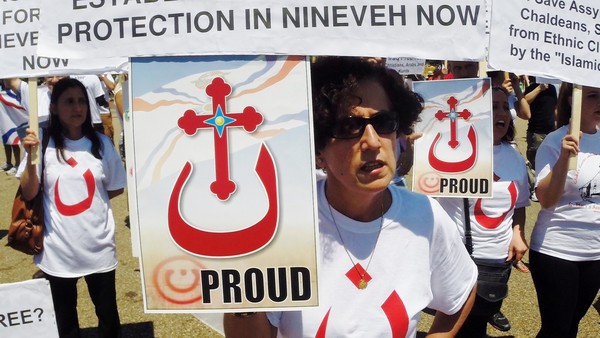 Assyrian Christians forced to flee from their homes by last summer’s advance of Islamic State fighters are forming a militia of up to 4,000 men to take back their homeland.

According to the London-based Catholic Herald[2],

Their aim is to take back the rest of the Nineveh Plains, a traditionally Christian part of Iraq, which was overrun by ISIS last summer. More than 100,000 Christians are currently displaced in the nearby Kurdish-controlled region of northern Iraq, along with a large number of Yazidis.

The group, the Nineveh Plains Protection Unit, is allied with the Iraqi Army and Kurdish pesh merga militia, according to the Catholic Herald. It is funded largely by donations from Assyrians and those of Assyrian descent living in the United States, Australia and Sweden and being trained by American contractors, the paper reported.

According to Newsweek[3], Iraq analyst Sajad Jiyad said the militia’s existence alone tells the Islamic State they are in for a fight.

“It’s also important for the locals to send a message to ISIS that they are not going to allow the demographic change to become permanent,” he told the magazine.

A British Assyrian, John Michael, told the paper the militia is a last resort for a people that has been under attack by the Islamic State since last summer.

“This is our last stand,” he said. “If this fails then Christianity will be finished in Iraq.”

Obama did nothing as the Christians there were slaughtered, enslaved and exiled. Wrong religion, wrong God, I guess. Now, a small force will fight to the literal death to save their homes and land from conquest and the world just sits here and watches like it is some kind of reality show. It feels like we are using TV and the Internet as the ultimate Roman Colosseum and once again the Christians are being thrown into the arena to fight to the death. The crowds are given breads and circuses, while cheering wildly. Meanwhile God weeps for his children in Iraq.