Barbaric savages[1]. They are destroying everything that was beautiful and recorded about that culture. It’s not just the priceless winged bull or the statues… no, they took the fascist boogie a step further and destroyed all the books. Many of those were priceless as well. In the name of their twisted beliefs, they took sledgehammers and drills to the irreplaceable statues and sculptures of Iraq. The penalty for hiding any of them in your home is death. And we all know ISIS really loves death – they are a death cult. ISIS says that all the items destroyed are idolatry and that the Prophet orders they destroy them. 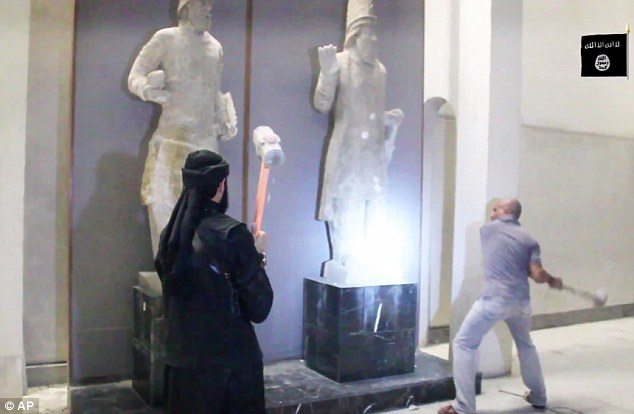 Extremists used sledgehammers and power drills to smash ancient artifacts at a museum in the northern city of Mosul.

Islamic State thugs have destroyed a collection of priceless statues and sculptures in Iraq dating back thousands of years.

Extremists used sledgehammers and power drills to smash ancient artwork as they rampaged through a museum in the northern city of Mosul.

Video footage shows a group of bearded men in the Nineveh Museum using tools to wreck 3,000-year-old statues after pushing them over.

One of the items, depicting a winged-bull Assyrian protective deity, dates back to the 9th century B.C.

A man shown in the video said the items were being destroyed because they promoted idolatry.

‘The Prophet ordered us to get rid of statues and relics, and his companions did the same when they conquered countries after him,’ the unidentified man said.

The articles destroyed appeared to come from an antiquities museum in the northern city of Mosul, which was overrun by Islamic State last June, a former employee at the museum told Reuters.

The extremist group has destroyed a number of shrines – including Muslim holy sites – in a bid to eliminate what it views as heresy.

Militants are also believed to have sold ancient artwork on the black market in order to finance their bloody campaign across the region.

The video bore the logo of the ISIS group’s media arm and was posted on a Twitter account used by the group.

Yesterday it was revealed how terrorists had blown up the Mosul Public Library, sending 10,000 books and more than 700 rare manuscripts up in flames.

Leading members of Mosul society reportedly tried to stop the fanatics destroying the building, but failed.

The director of the library, Ghanim al-Ta’an, said that the extremists used homemade bombs in the attack, which took place on Sunday.

Presumed destroyed are the Central Library’s collection of Iraqi newspapers dating to the early 20th century, maps and books from the Ottoman Empire and book collections contributed by around 100 of Mosul’s establishment families.

Isis first invaded the Central Library in January. Residents say the extremists smashed the locks that had protected the biggest repository of learning in the northern Iraq town, and loaded around 2,000 books – including children’s stories, poetry, philosophy and tomes on sports, health, culture and science – into six pickup trucks. They left only Islamic texts.

‘These books promote infidelity and call for disobeying Allah. So they will be burned,’ a bearded militant in traditional Afghani two-piece clothing told residents, according to one man living nearby who spoke to The Associated Press.

The man, who spoke on condition of anonymity because he feared retaliation, said the Islamic State group official made his impromptu address as others stuffed books into empty flour bags.

Since the Islamic State group seized a third of Iraq and neighboring Syria, they have sought to purge society of everything that doesn’t conform to their violent interpretation of Islam.

They have already destroyed many archaeological relics, deeming them pagan, and even Islamic sites considered idolatrous. Increasingly books are in the firing line.

Mosul, the biggest city in the Islamic State group’s self-declared caliphate, boasts a relatively educated, diverse population that seeks to preserve its heritage sites and libraries.

The destruction is of any site they consider pagan, even Islamic sites that they deem idolatrous. So, not only is ISIS slaughtering anyone not of Islam or enslaving them, they are sweeping the country clean of culture and history. Remaking it in their image – sounds Progressive, huh? This is all part and parcel of the conquest by the Caliphate of these lands and if left unchecked, they will cut a bloody trail through many more and destroy everything mankind holds dear. Everything. It is incredibly sad that we are allowing this to happen. Tragic.