The kidnapped Nigerian girls prompted worldwide outrage and a hashtag campaign from our Dear Leader, but the Yazidi girls captured by ISIS seemingly don’t merit the same attention. Now, in a horrific new development, it seems that ISIS will be selling the captured girls for $10. 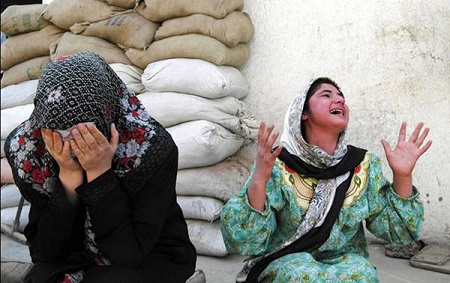 For the past week, Khandhar Kaliph’s hands have trembled whenever his phone has rung.

He nervously greeted his daughter, who had been kidnapped when the Islamic State (Isis) overran the Yazidi city of Sinjar. There was a minute of silence, before he broke down sobbing.

“She said she is going to be sold as a slave this afternoon, for $10,” Kaliph said, his tears dropping into the brown dust. “What can a father say to that. How can I help? We all feel so useless.”

Kaliph’s daughter, who he did not want to name, had access to a group phone passed around between other girls imprisoned by the Islamic State in Bardoush prison in central Mosul.

All face the imminent prospect of being married off. Or worse, being used by the jihadis as a sex slave.

If one ever has any doubt that evil exists, they only need to read this story to see how very real evil is. It’s time that we drop this “religion of peace” crap and start acknowledging the reality of how barbaric this religion truly is.