Hard to know if this is propaganda[1] from the Iraqi forces or not. I also believe these are old photographs and I have seen them before. Nevertheless, there will be those who try to escape in this manner and if caught by either side, they will face death. This is also a tactic of terrorists used to take an enemy by surprise and kill them unexpectedly since Jihadists fear being killed by a woman and not going to paradise. The Islamists will use whatever disguises are most readily available for their given purposes. It that means donning a burka and makeup – then accessorize. 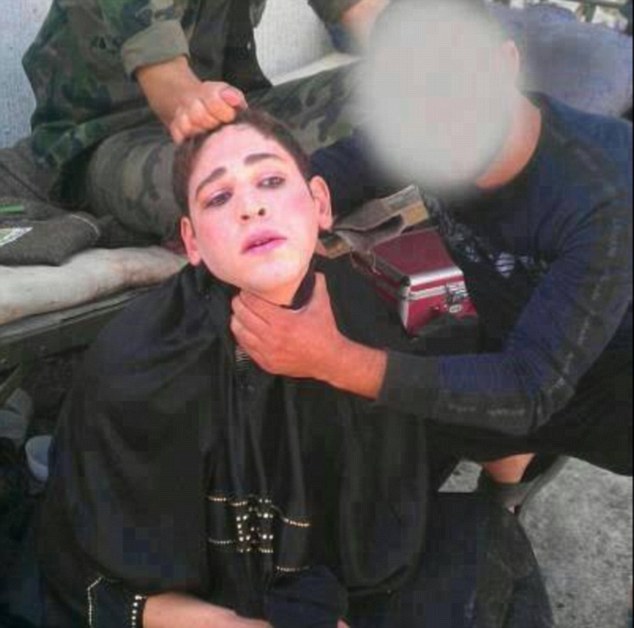 The photographs, posted on Instagram, show authorities appearing to pull back burkas
to reveal young boys and even men with moustaches. It is not known when the images were originally taken.

Islamic State fighters are shaving off their beards and dressing as women in a bid to escape from battle, Iraqi forces have claimed.

A series of pictures have emerged showing men who have reportedly been caught trying to escape from northern Iraq wearing dresses, bras and make-up.

The photographs, posted on Instagram, show authorities appearing to pull back burkas to reveal young boys and even men with moustaches.

In one a scared teenager wearing pink eyeshadow is held by the throat as an official takes a picture. It is not known when the photograph was originally taken.

Under Sharia law, which ISIS partially adheres to, women are prevented from fighting.

Jihadists are believed to be terrified of being killed by a female because they think it will stop them getting their 72 virgins in heaven.

But men – and even boys as young as 13 – have been given powerful machine guns and are expected to join the cause.

The photographs were revealed just five days after it emerged three men from the region were accused of homosexuality and publicly beheaded by a sword-wielding ISIS executioner.

Iraqi troops and militia are battling to push ISIS back from the area with support from a US-led coalition and Iran.

But retaking Nineveh and Mosul poses a major challenge for Baghdad’s forces, as the militants have had more than nine months to dig in.

Iraqi forces launched a huge operation last week aimed at retaking the city of Tikrit that, if successful, would serve as a stepping stone towards Mosul.

I don’t hold out much hope that the Iraqi forces will take back Tikrit or Mosul. ISIS is far more brutal and dug in. No amount of propaganda or chest beating is going to change the fact that the Caliphate is rising and that ISIS will only get more and more savage as they go. Men and boys are being conscripted (forced) to join or die as they advance. Their armies will only get larger. The US has not killed a major leader of theirs in over six months and even the CIA says their forces have snowballed. The Iraqis and everyone else are desperate to stop ISIS. But unless they are met with equal force, we are in for a very bloody long haul.