Judge Jeanine Pirro Asks: Why Is Obama On The Wrong Side Of History? [Video]

Barack Obama has been on the wrong side of history[1] from the very beginning – on purpose. Instead of fighting the Islamic State and the Caliphate, Obama is enabling them. He has brought the Muslim Brotherhood into the White House and they are literally running parts of our government. He hearts Iran, who is a theological, messianic, genocidal regime, while dissing Israel and telling Netanyahu he is out of line. If Obama succeeds with his agenda, millions will die. As he finishes nationalizing everything in the US and gutting our military, the nuclear clock will strike midnight. He is furthering the Caliphate plain and simple. Just evil. 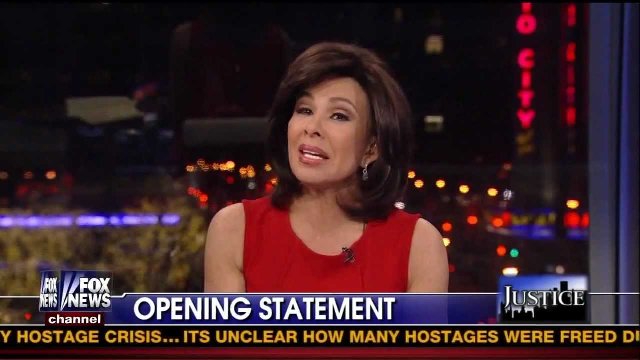 Judge Jeanine Pirro questioned why President Barack Obama accuses his opponents of being “on the wrong side of history” on her Fox News Channel show, Justice with Judge Jeanine, Saturday night. Judge Jeanine criticized Obama for not working with the leaders of Egypt and Jordan to destroy ISIS.

She mocks Obama’s excuse for not wanting to legitimize ISIS by calling them Islamists.

Pirro did not let up in her scathing criticism of Obama’s lack of leadership in contrast to Jordan’s king and Egypt’s president.

And, when 21 of his people were killed, beheaded, Egyptian President el-Sisi had his military take to the air within 24 hours to bomb his enemy. And when Jordanian King Abdullah heard of the burning of his soldier, he raced back to Jordan to rally his forces, hang two terrorists, and organize a military strike against ISIS. But you Mr. President, what do you do? You hit the golf course within minutes of announcing the beheading of an American citizen. It must be good to be you.

She went on to slam the president for his attempts at inhibiting Israeli Prime Minister Benjamin Netanyahu from speaking to Congress about the threat of Iran obtaining a nuclear bomb.

But tell me this, what’s more destructive? The leader of one of our allies speaking to Congress or a nuclear bomb in the hands of Iran?

And while your ace State Department spokesperson wants to give them jobs, the last laugh, Mr. President is on you. Many of these jihadists, as we found out last week, are not in need of a job. Actually, they are pretty well heeled.

The Judge concluded her Opening Statement:

And by the way, they don’t need a job. They have a job. Their job is to kill us.

Obama’s wife and daughters are off on another vacation to Asia and he is off to golf – again. The disinterest, apathy and sheer contempt he has for the US is staggering. Our enemies laugh at us for acting the fool and letting a blatant Marxist whose sympathies lie with radical Islam lead us over the cliff. IS is slaughtering Christians at will and the Jews are in the crosshairs of the Mullahs… many, many Muslims are being butchered as well. And Obama sits there with a smug look on his face and lectures our ally Israel on how bad they are and how they overreact. He won’t be satisfied until they are nuked and we are a full blown communist regime here in the states. When do we stop all this madness? How far will Americans let this go before we step up and halt it? Every morning I am stunned by the news and what is occurring. And the killing goes on.