The tears of a Queen[1] and a murdered pilot’s wife of six months… how could you not be moved. When I watched the brutal murder of the Jordanian pilot, I wept. I have seen many, many horrible things in my line of work, this one left me without words. I just knew when Jordan asked for proof of life that the pilot was already dead, but I never imagined how barbaric his death would be. As thousands of Jordanians and Queen Rania gather in the streets of Jordan, they are bombing the hell out of ISIS. But America just denied drones[2] to the Jordanians and they will not be defeated with just airstrikes. Bless that pilot’s wife – how do you ever come back from something like this? 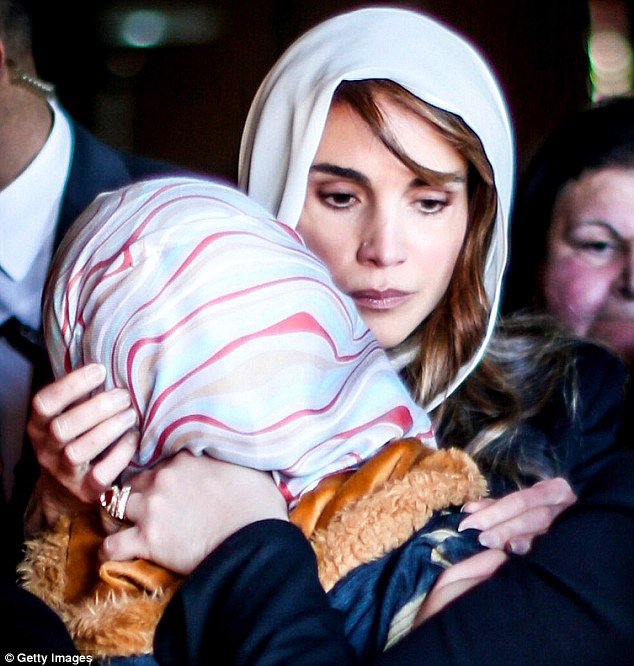 Heart-wrenching: Queen Raina of Jordan comforts Anwar Tarawneh, wife of the pilot who was brutally murdered at the hands of ISIS militants, at her late husband’s ancestral home near the southern town of Karak. 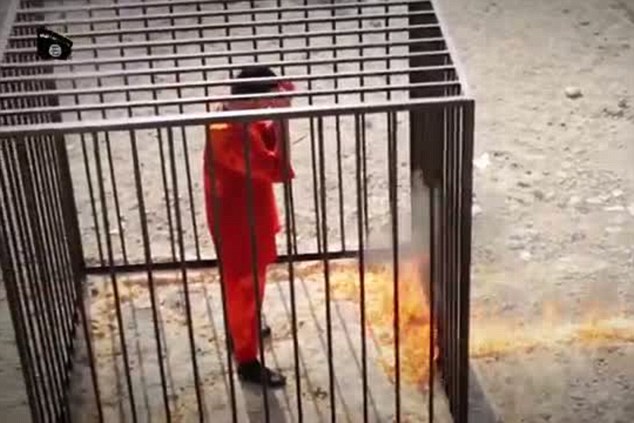 Brutal: ISIS released a horrific 22-minute long video showing the pilot being burnt alive while locked in a cage. His wife was at a sit-in being held to support his plight when she heard of his death.

This is the moment Queen Rania of Jordan consoled the grief-stricken wife of the pilot brutally murdered by ISIS.

Devastated Anwar Tarawneh sobbed as she was comforted by the royal after the pair met at the couple’s family home, near the southern town of Karak.

Pictures of the tearful meeting emerged after the widow revealed that she learned of her husband’s death when she read a Facebook post saying: ‘Rest in peace, Muath [Moaz]’.

Anwar Tarawneh had been married to Moaz al-Kasasbeh for just five months when he was captured by ISIS.

The meeting came as Jordan said its warplanes had launched dozens of new airstrikes yesterday against the Islamic State group after vowing a harsh response to Lt al-Kasasbeh’s death.

Jordan’s Foreign Minister Nasser Judeh warned this was just the start of its offensive against the terror group, vowing to ‘go after them with everything that we have’.

Her heart-wrenching story emerged on the same day she was comforted by Jordan’s Queen Raina during the royal’s visit to the Kasasbeh family home, near the southern town of Karak.

Speaking to The Independent[3] on Thursday, Ms Tarawneh said she was at a sit-in protest being held in support of Kasasbeh on Tuesday when she received a tearful phone call from her mother.

By then, her 26-year-old husband had been an ISIS hostage for five weeks after his aircraft was shot down over Raqqa. Concerned that something was wrong, she checked her mobile.

‘It was only when I opened Facebook on my phone that I saw the post,’ she said.

She also told of how her husband had felt uneasy on the day of his final flight, saying that he hoped there would be a fog so he wouldn’t have to fly.

She said: ‘He had the feeling something would go wrong. It was strange, he had never said that before.’

That was on December 24. Just hours later, the F-16 fighter jet Kasasbeh was shot down over ISIS-controlled territory in Syria.

Soon afterwards, the terror group revealed he was being held prisoner.

Daesh must be stopped. The world should take a page from Egypt and ban ISIS. Anyone associated with them or the Caliphate should be executed – period. I just heard they burned three more alive in Iraq[4]. The bastards made the villagers watch. These barbarians are the very definition of psychotic monsters. Jordan will fight them with or without the US. Obama is busy coordinating with the Muslim Brotherhood in the White House and standing with our enemies instead of against them. The King of Jordan will dry his Queen’s tears and lead a response with the Coalition and every bit of might he has. The question is, are we part of that coalition or not?