Rev. Graham: ‘Sharia Law Should Be Banned in U.S.,’ Pray For ‘Those Living Under Islam’

The Rev. Graham is absolutely right…[1] Sharia law should be banned in the U.S. It is barbaric and suppressive in nature and has no business being condoned or accepted in our country. We answer to Constitutional law, not a theocratic doctrine. Sharia is being imposed in countries such as Britain, Sweden and the Netherlands with catastrophic results. It is balkanizing free countries and enabling conquest from within by radical Islam. There is nothing ‘free’ about Sharia law. It condones murder, slavery, torture and barbarism straight out of the Dark Ages. 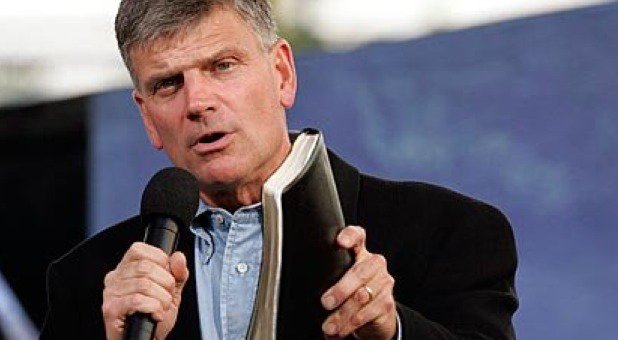 In response to a BBC report on the barbaric nature of life under the Islamic State in Iraq, Christian evangelist Franklin Graham said sharia (or Islamic) law should be banned from America and “all countries that cherish freedom,” adding that women, gays, Christians, and minorites are being “tortured and killed” and President Obama does not seem to know what to do.

Graham also called on people to “pray for all those living under Islam.”

“The BBC just published a story about life under radical Islam — what it’s really like,” said Rev. Graham in a June 11 Facebook post. “This is a vivid reminder of why Sharia law should be banned in the U.S. and all countries that cherish freedom and liberty.”

“Some western governments are actually considering allowing Sharia law in certain Muslim communities in their countries — can you believe it?” he said. “ISIS is imposing Sharia law on hundreds of thousands of Iraqis and Syrians who want to be free.”

“Women are oppressed, Christians and minorities are persecuted and murdered, homosexuals are tortured and killed,” siad Rev. Graham. “President Obama seems to be at a loss as to what to do.”

“Pray that God will give him and our leaders wisdom, and pray for all those living under Islam,” said the reverend, who runs the Billy Graham Evangelistic Association[2].

The BBC News report, “Inside Mosul: What’s Life Like Under Islamic State?” can be read here[3]. The report, which includes video that was secretly recorded in Mosul, provides information on the persecution and control of women by the Islamic State; the persecution of minorities, particularly Christians; the “intimidation, punishment, and torture” of people for actions such as adultery (stoning to death) and even smoking a cigarette; disruption of daily life — jobs lost, schools closed; and “indoctrination and surveillance” throughout the area.

Franklin Graham, who also runs the international Christian relief group Samaritan’s Purse, is the son of world-renowned evangelist Billy Graham. Rev. Franklin Graham often preaches in the United States and abroad, and often speaks out against the injustices of radical Islam.

I have the greatest respect for Franklin Graham. He is a man of conviction and is not shy about saying what he believes. I wish there were many more like him. The Progressives in America are trying to make Sharia law acceptable to Americans. I wonder if Americans knew what it truly meant to live under the yolk of Sharia law, how quickly they would run from it? Honor killings, the fact that women are worth only a fraction of what a man is, murder and mutilation for the most minor offense, the abuse of gays, women and children… not to mention anyone of a different religious bent. Death sentences for those who would leave Islam and the list goes on. In Michigan and other states that are Progressive, you are already seeing pockets of Sharia law where our police will not go and where Muslims live under their own rule outside of U.S. law. Obama is not at a loss… he is furthering this and is not blind to the genocide of Christians. Ban Sharia law from America and do not submit to the Muslim Brotherhood and the Caliphate. 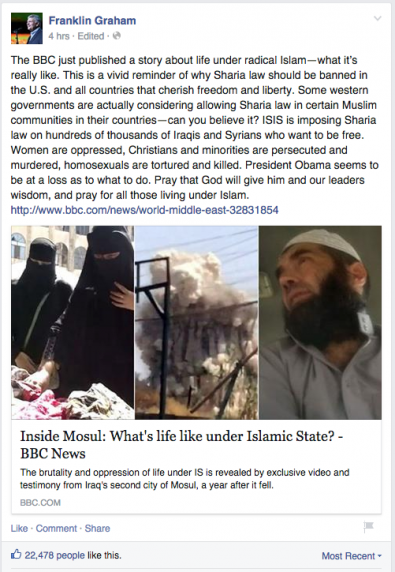