The World’s Ten Worst Places to Be a Christian 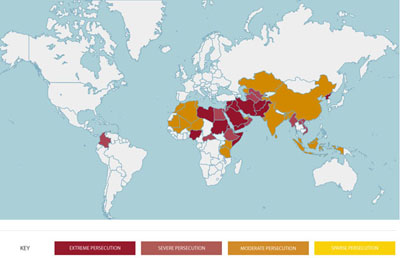 The 2014 World Watch List[1] of the 50 worst places in the world to be a Christian has been released showing all the usual suspect nations where Christians face daily persecution.

Since the American invasion of Iraq and later as the so-called Arab Spring has grown, persecution of Christians has exploded across the world–most especially in the middle east and Africa.

The watchdog group Open Doors USA[2] has released its list of the worst places to be a Christian and topping the list are North Korea, Somalia, Syria and regrettably, Iraq and Afghanistan.

One thing is true about our invasions of Iraq and Afghanistan: it has been a terror to Christians there. We may have gotten rid of Saddam, we may have put a hurt on terrorism, and we may be seeing local populations in the mid east and Africa beginning to assert their power over long-time tyrants, but it has all come at the expense of Christians as Islamists grow in power and launch their inevitable murderous ethnic and religious cleansing.

Dr. David Curry, CEO and president of Open Doors USA, hopes that his list will draw attention to the plight of Christians across the world.

“We’re going to motivate the U.S. to pay attention to this issue as a critical component of creating free societies and to support Christians wherever they may be in the world,” he told The Blaze[3].

The top ten worst are:

Of course, the Obama administration has become an ever growing enemy to America’s religious freedom with his attacks on Christians in America today.