I don’t find it bewildering at all[1]. It’s absolutely predictable for the ultimate enemy from within – Barack Obama. Obama will not name the enemy because he supports radical Islam. He is Islamic, therefore he will not speak against them. Cotton and McInerney are correct, Obama is aiding and abetting the enemy – radical Islamists. But where the point is missed is the notion that he doesn’t recognize the enemy – he assuredly does and knows exactly what he is doing. It also serves for political cover, but that is a by-product. All of this is right in line with Obama’s beliefs – just as a Summit on Violent Extremism that says that right-wing extremists are more violent than the Islamic State is, then he turns around and broadcasts our military plans. It’s called treason. 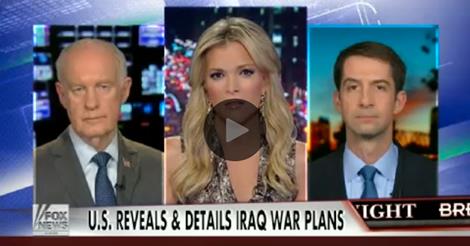 Using words such as “absurd,” “preposterous” and “bewildering,” military experts, lawmakers and legal analysts reacted with dismay[2] to the Pentagon’s detailed announcement of a planned assault to retake the key Iraqi city of Mosul from Islamic State terror fighters.

As Newsmax[3] reports: “Fox News Channel analysts Andrew Napolitano and Charles Krauthammer said the United States is giving up the element of surprise, with Napolitano, a retired judge, saying it is ‘almost a violation of law by revealing national security secrets to the enemy.’”

U.S. Central Command on Thursday revealed plans for the Spring offensive[4] — a disclosure that baffled both a U.S. Senator who is an Iraq War veteran, as well as a retired general who claimed that sharing war plans in advance is “aiding and abetting the enemy.”

Via Newsmax: “The Islamic State (ISIS) took Mosul, Iraq’s second largest city, last summer, angering American war veterans who were part of liberating the city during the Iraq War in 2003.”

Republican Senator Tom Cotton of Arkansas and retired Air Force Gen. Thomas McInerney both appeared on Fox News’ “The Kelly File[5]” to denounce the Pentagon’s disclosure of plans to train and send a certain number of Iraqi troops into Mosul in March or April.

The military’s anger is totally understandable. They are being betrayed by their Commander-in-Chief and they know it. It is demoralizing. Mosul was taken by us in 2003 and Obama gifted it back to the Caliphate. There is no element of surprise, because Obama is deliberately informing the enemy. Way in advance, I might add. It’s just like the faux hits against the Islamic State from the air. None of it is real and is only smoke and mirrors. Why do you think we are not supporting Egypt or Jordan? Why do you think we haven’t even sent one bullet to the Kurds? Obama will never name the enemy, because he is the enemy. You should expect nothing less and he needs to be removed from office – yesterday. It’s a matter of survival.