Jim Jordan Grills IRS Head Over What He Waited Two Months To Do, Asking “At What Point Does It Become Obstruction of Justice?”

The Obama administration has decided to use every third-graders favorite excuse when it comes to dealing with the ever-growing scandal surrounding the targeting of conservative groups by the IRS: Lois Lerner, the official responsible, lost all her e-mails! And after realizing that the IRS chose not to let anyone know for two months, Ohio Representative Jim Jordon gave us this brilliant video, in which he grills IRS head John Koskinen. 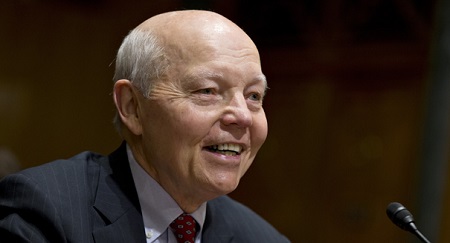 Koskinen claimed he didn’t tell Congress, the White House, FBI, Inspector General or any other outside agencies about losing Lerner’s emails until the IRS released a public report last Friday.

“So you knew in April and you waited two months to tell this body?” Jordan asked.

The GOP congressman later asked at what point does sitting on “critical” information “become obstruction of justice.”

“We’ve been after this for 13 months,” Jordan said. “We subpoenaed six months ago for this, you had a hearing on the 26th where everyone went after you and said, ‘We want all the emails,’ and you assured us you’d get them all to us, and then you learned you can’t – and you don’t tell anybody?”

“This is ridiculous,” he added.

Rep. Jordan hit the nail on the head: this is obstruction of justice, and good for him for calling it what it is. But let’s be honest: obstruction of justice is child’s play in the Obama administration, and it’s not likely that anyone is ever going to see any justice for their part in this, save a sacrificial lamb or two.