Winston Churchill once said, “You can always count on Americans to do the right thing – after they’ve tried everything else.” The same could be said of House Republicans when it comes to Lois Lerner.[1] 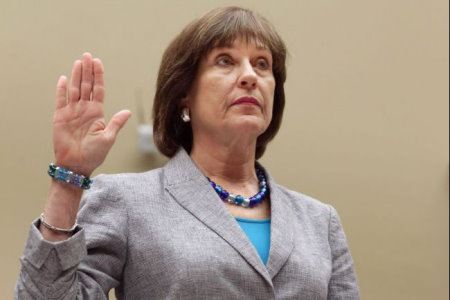 The House voted Wednesday to hold a former Internal Revenue Service official in contempt of Congress for refusing to testify at a pair of committee hearings about her role in the agency’s tea party controversy.

The House also passed a nonbinding resolution calling on the Justice Department to appoint a special counsel to investigate the IRS.

…The vote to hold Lerner in contempt of Congress was 231 to 187, with all Republicans voting in favor. They were joined by six Democrats, Ron Barber of Arizona, John Barrow of Georgia, Mike McIntyre of North Carolina, Patrick Murphy of Florida, Collin Peterson of Minnesota, and Nick Rahall of West Virginia.

Lerner invoked her Fifth Amendment right not to answer questions at a pair of hearings by the Oversight Committee. House Republicans say she waived her constitutional right by making an opening statement in which she proclaimed her innocence.

The matter now goes to Ronald Machen, the U.S. attorney for the District of Columbia. Federal law says Machen has a “duty” to bring the matter before a grand jury. But a report by the nonpartisan Congressional Research Service said it was unclear whether the duty is mandatory or discretionary. Machen was appointed to his job by President Barack Obama.

“We will carefully review the report from the speaker of the House and take whatever action is appropriate,” Machen’s office said in a statement.

The vote calling on the Justice Department to appoint a special counsel was 250 to 168, with all Republicans voting in favor. They were joined by 26 Democrats.

If Eric Holder doesn’t choose to prosecute Lerner or appoint a special counsel, Congress has the authority to jail Lerner for up to a year for contempt. If it comes to it, Congress should do exactly that and let her rot in jail until the year’s up or she spills her guts.

In a string of IRS cases, taxpayers could not take the Fifth. In sniffing out foreign bank accounts, the IRS and DOJ issue John Doe summonses, indict foreign nationals, and more. The law requiring FBARs gives the government a hook to subpoena a taxpayer suspected of having an undisclosed offshore account. You can take the Fifth Amendment and refuse to testify, but can you take the Fifth on bank records?

You might think so, since the “act of production” privilege is part of the Fifth Amendment guarantee. The government can’t compel you to produce incriminating documents. Clearly, bank records or FBARs could incriminate you.

Nevertheless, the Fifth, Seventh, Ninth, andEleventh Circuits say the Fifth Amendment provides no protection. The government victory in these cases hinges on Shapiro v. United States, holding that you can be forced to produce “essentially regulatory” records if the conduct was not “inherently criminal” and the records are not purely personal. You might think foreign bank records are such hot buttons that the Fifth applies.

You also might think your foreign bank records are purely personal too, especially today. Nope, the government can make you incriminate yourself. Lawyers petitioned the U.S. Supreme Court for certiorari review, but the Court said no.

As a result, some people are being forced to produce bank records that may land them in jail. Conversely, a retired IRS official with government pension can take the Fifth about official duties that go to the heart of taxpayer perceptions of a fair tax system.