Thursday, Donald Trump ordered that the Massive Ordnance Air Blast, nicknamed the “Mother of All Bombs,” be dropped in Afghanistan. The massive bomb, the largest non-nuclear weapon in our military arsenal, is reported to have killed 36 Jihadists and took out a network of tunnels ISIS was using. Now, the Pentagon has just released video of the bombing[1]. 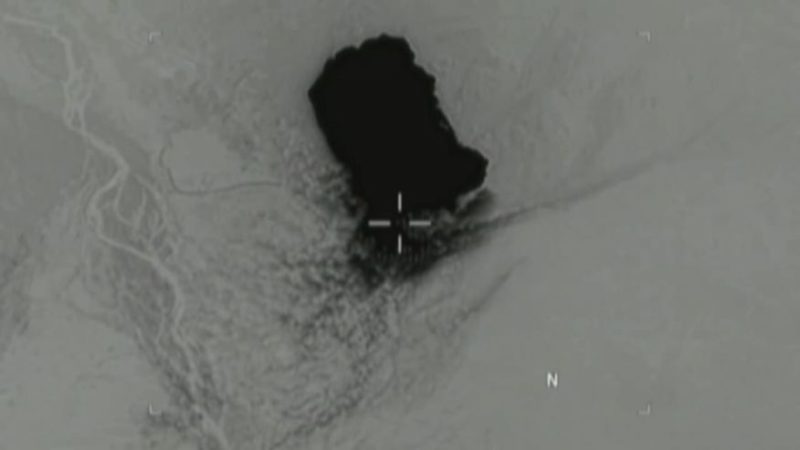 United States Forces – Afghanistan released a statement along with the video. “At 7:32 p.m. local time today, U.S. Forces – Afghanistan conducted a strike on an ISIS-K tunnel complex in Achin district, Nangarhar province, Afghanistan, as part of ongoing efforts to defeat ISIS-K in Afghanistan in 2017,” the statement read. “The strike was designed to minimize the risk to Afghan and U.S. forces conducting clearing operations in the area.”

Evidently, the strike was successful, as no innocent civilians were injured or killed. ABC News released the video, explaining, “The MOAB bomb is the most powerful non-nuclear weapon ever used in combat and one of the largest bombs in the U.S. arsenal. The bomb was dropped from the rear of an MC-130 aircraft. The MOAB is so large that it is carried in the cargo hold of the aircraft then rolled out the plane’s rear door toward its target.”

Friday, U.S. Army Gen. John Nicholson applauded the decision to use the MOAB bomb from a press conference in Kabul, Afghanistan. “This was the right weapon against this target,” he said. “The purpose of this operation was to eliminate that sanctuary.” The sanctuary he referred to is a series of tunnels beneath Afghanistan’s mountains, previously used by Al Qaeda and now being used by ISIS to attack government forces.

As for Donald Trump, he was quick to point out that Barack Obama’s era of military weakness is over.

“If you look at what’s happened over the last eight weeks and compare that really to what’s happened over the past eight years, you’ll see there’s a tremendous difference,” Trump said. “We have the greatest military in the world and they’ve done a job as usual. We have given them total authorization and that’s what they’re doing and frankly. That’s why they’ve been so successful lately.”

Do you support Trump’s decision to drop the MOAB bomb?