EXPOSED: Terrorists Plan To Use American/Mexican Border To Do THIS!

Four Muslims who are no doubt Islamic refugees[1] relocated to Minnesota have been nailed on tape professing their allegiance to ISIS and even more worrisome, setting up a route for Syrian terrorists to come into the US from Mexico via our porous border. Guled Ali Omar, age 21, was the Jihadist in charge of the operation here in the US. He was working with his three closest buds: Hamza Naj Ahmed, 21; Mohamed Abdihamid Farah, 22; and Abdirahman Yasin Daud, 22. These Islamists are the prime age for ISIS recruitment and terrorist activities. Apparently, Omar hoped that his diabolical idea might impress his Islamic State group recruiters. Instead, he got nabbed by the FBI. Fail. Authorities reportedly also discovered pictures of the burning World Trade Center and terrorist mastermind Osama bin Laden on Omar’s cellphone. I’m sure it’s just a coincidence. International Business Times added that the four terrorist wannabees also spoke about murdering an FBI agent and firing homemade rockets at airplanes. These aren’t boys up to mischievous tricks… these are stone cold terrorists intent on killing Americans. 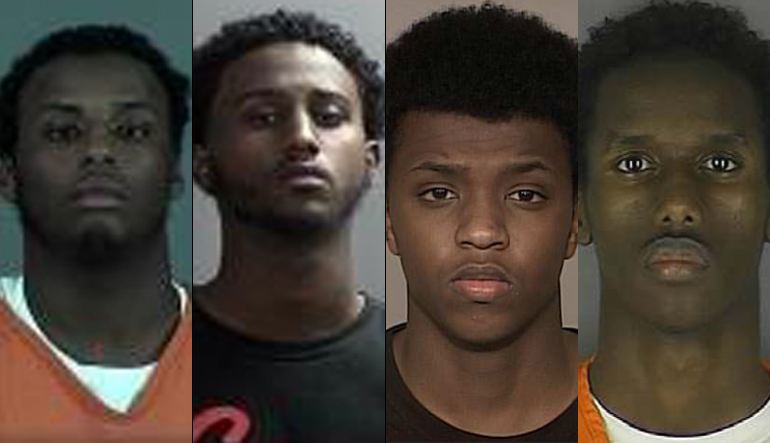 Audio recordings made during an investigation of four Minnesota-based Islamic State group wannabes showed one of them speaking about setting up a terrorist smuggling route from Syria to the United States via Mexico.

“Guled Ali Omar told the ISIS members about the route so that it could be used to send members to America to carry out terrorist attacks[3], prosecutors alleged in a document filed this week,” Fox News[4] reported.

Omar, 21, and three of his peers — Hamza Naj Ahmed, 21; Mohamed Abdihamid Farah, 22; and Abdirahman Yasin Daud, 22 — all pleaded “not guilty” this week to conspiring to travel to the Middle East to join up with the terrorist group.

The FBI has said about a dozen people have left Minnesota to join militant groups fighting in Syria in recent years. In addition, since 2007 more than 22 men have joined al-Shabab in Somalia. Did you know[5] that 1.2% of Somalia’s population has now been relocated to America? Makes you feel all safe and sound, huh? Prosecutors have said these four shining examples of killers-in-training were part of a group of friends in Minnesota’s Somali community who held secret meetings and plotted to join the Islamic State group. Five other men have pleaded guilty to one count each of conspiracy to support a foreign terrorist organization. A tenth man charged in the case is at-large, believed to be in Syria. If this tells us anything, it is that it is only a matter of time until ISIS gets over that border if they haven’t already. Then they will wreak bloody havoc in our country. And behind it all, you can thank Barack Obama for the blood that will flow. The only diversity ISIS believes in is death for all.