A video circulating the Internet identifies a map that displays areas ISIS may invade next[1]. 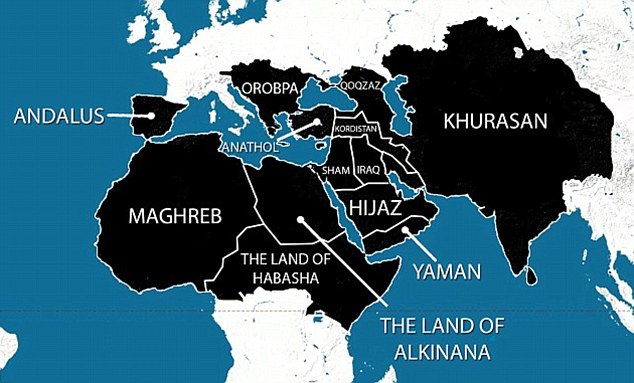 Caliphate: This map purportedly showing the areas ISIS plans to have under its control within five years was shared widely online in 2014. As well as the Middle East, North Africa and large areas of Asia, it also reveals ISIS’ ambition to extend into Europe. Spain, which was Muslim-ruled until the late 15th Century, would form part of the caliphate, as would the Balkan states and eastern Europe, up to and including Austria

And this is the problem with extremists folks. ISIS would be fine if they lived in their own neighborhood, by their own laws, and kept to themselves with their own culture. That would be fine because they weren’t imposing their beliefs on others. Traveling to other towns and imposing your own laws and “taking over” doesn’t work in modern times. That usually ends with a military beat down.
Endnotes: