I’m guessing this wasn’t the reaction[1] those dirty savages in ISIS expected when they burned a Jordanian pilot alive. 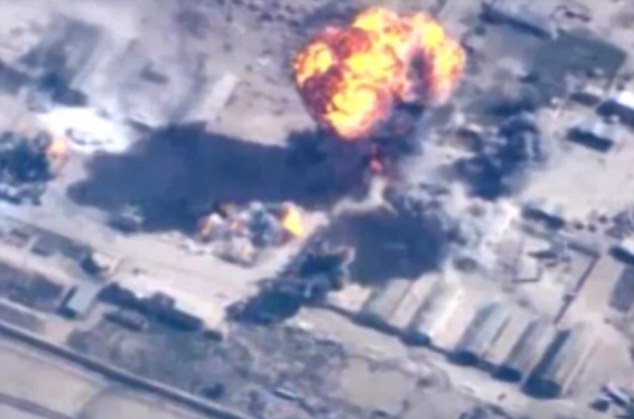 Jordan has released a slickly-edited video that shows its war planes being prepared for bombing strikes against Islamic State jihadists in Syria.

The footage, understood to have been broadcast on state TV, shows troops messages on plane-mounted missiles before the fleet of fighter jets are launched from the base.

The mission – dubbed Operation Martyr Moaz in memory of the pilot brutally killed by ISIS – is the latest show of force from the nation, which has promised a ‘harsh’ war against the terror group.

It comes just hours after Jordanian fighter pilots made a diversion over the hometown of their murdered comrade, Moaz al-Kasasbeh, on their return from an air raid this morning.

…It has now been two days ISIS released a horrific 22-minute long video showing the pilot being burnt alive while locked in a cage.

The act has been widely condemned as among the most sickening ever committed to film and has sent waves of revulsion across the region.

The air strike video, released today on the YouTube channel of a national radio station, is the latest show of strength. It is understood to have been recorded at Muwaffaq Salti Air Base.

The military’s statement, read on state TV, was entitled, ‘This is the beginning and you will get to know the Jordanians’ – an apparent warning to ISIS.
It said the strikes will continue ‘until we eliminate them.’

Obama’s incompetence led to the rise of ISIS in Iraq and now, he’s in the background while a sandy backwater like Jordan is taking the lead. Obama could AT LEAST send them better equipment to fight with. God help us survive the idiot we have in the White House for another two years.