10,000 Muslims Committed To March AGAINST Terrorism – Guess How Many Showed Up [VIDEO]

In Cologne, Germany[1], over the weekend, organizers had anticipated more than 10,000 Muslims would show up at an anti-terrorism rally. Not so much. ABC is touting that 1,000 showed up, but it’s ABC… after their lying over the Tea Party rallies, does anyone really believe them anymore? The point is, Muslims are just not that into protesting against Islamists killing in the name of Allah. Many, many, many support it openly or quietly. Euronews reported that several hundred showed up, which is probably closer to the truth here. And they weren’t all Muslims. Go figure.

They carried signs that said, ‘Love for all, Hatred for none’. Yeah, right. The religion of peace is notoriously not peaceful, regardless of what they claim. The largest organization of Muslims in Germany, Ditib, refused to support the march. And the Turkish-Islamic Union openly spoke out against it. Saying something massively hypocritical and dumb, they claimed that to protest terrorism is to say it is solely an Islamic problem. It pretty much is. Let’s just say that over 90% of terrorism events are Islamic. They are giving themselves cover for actually supporting terrorism. 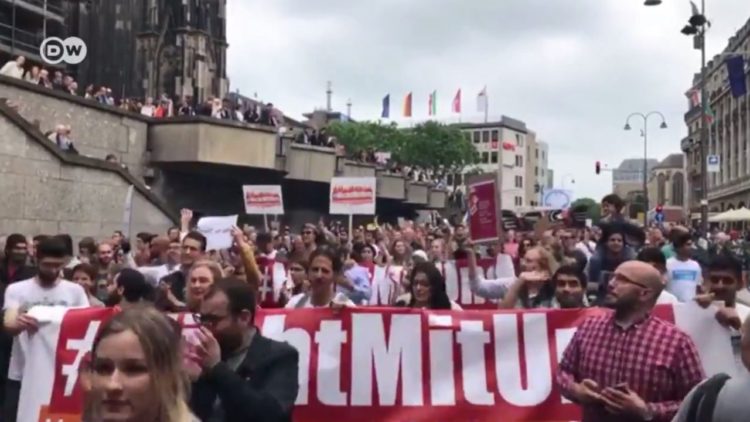 Organizers of a march of Muslims against terrorism in Cologne, Germany, were hoping to see as many as 10,000 show up Saturday to prove that the “religion of peace” did not condone terrorism. They were disappointed in that expectation.

Euronews reported[3] that only “several hundred” Germans, mostly Muslims, showed up to the march.

ABC News reported[4] that more than 1,000 eventually showed up to the march.

Today hundreds of Ahmadi Muslims march for peace in Cologne holding banners with their slogan 'Love for all, Hatred for none'. #NichtMitUns[5] pic.twitter.com/IAffmXkYfG[6]

Germany’s largest organization of Muslims, Ditib, declined to support the march, while the Turkish-Islamic Union spoke out against the demonstration, saying that it would only affirm the narrative that terrorism is an exclusively Islamic problem.

“Calls for ‘Muslim’ anti-terror demos fall too short, stigmatize Muslims, and constrict international terrorism to being just among them, and within their communities and mosques,” Ditib said in a statement.[8]

“We welcome public action, but reject the way in which this march has been organized,” Ditib concluded.

Newsweek publicized the march on Friday, in an article estimating how many would show up. “Around 10,000 people are expected to gather in the German city under the slogan “Not With Us” for the Ramadan peace march,” the post read, “first announced on June 7.”

10,000 Muslims will march in Cologne on Saturday against terrorism https://t.co/FvYHp09P8F[9] pic.twitter.com/lysILu8srX[10]

Attendees posted photographs and videos from the event on social media. It’s funny how Muslims refuse to take responsibility for the extremists that are pervasive throughout their numbers. It’s never Muslims, except it usually is. “Muslims always stand up against terrorism,” said one attendee, “but it’s not covered in mainstream media, mostly, they focus on those people who commit the terrorism, who commit the murders.” Really? Because I haven’t seen them… they are few and very far between.

This rally was a farce and everyone knows it. Muslims either support terrorism or they usually don’t speak out against it because they fear retaliation from fellow Muslims. Germany is lost to radical Islam and this is just one more indicator of it. Feigned love and peace are trumped by violence and butchery every time. Marches won’t stop the bloodshed in the name of their prophet and god.

"It's not the Muslims fault!" – thinks a participant at the anti-terrorism rally in Cologne. #NichtMitUns[5] #NotWithUs[12] pic.twitter.com/9cmFSXradP[13]

"I ❤️ Jesus, because Allah loved him!" reads a banner at the rally against extremism in Cologne today. #NichtMitUns[5] #NotWithUs[12] pic.twitter.com/Fs510Jz8Eo[17]

Number of participants at Muslim peace march in Cologne were far less than expected. Is it because DITIB's absence? #NichtMitUns[5] #NotWithUs[12] pic.twitter.com/93kyvYCll2[19]