ANTIFA Woman Goes To Turkey For Muslim Boyfriend, Learns FIRST HAND, We Were Right All Along… [VIDEO]

Lacy Macauley is one of the radical leftists[1] who were behind #DisruptJ20 that tried to disrupt President Trump’s inauguration. In my book, she is a dedicated communist and a violent one at that. So, I don’t have a lot of sympathy for her tale of woe. She is an activist from Washington, DC. This woman is in every leftist movement she can get into: G20, Occupy, protests against the Dakota pipeline and tar sands. She’s a peach. She went to Turkey last year to protest at the G20. There, she met a Muslim man and fell in love. She went back this year to be with him and things didn’t go exactly the way she planned. Big surprise there.

When she got there, the fighting began. He forbade her from talking with women he didn’t like. He cut her off from the Internet and demanded she cut ties with men. He threatened to burn her with cigarettes and would throw objects at her. He poured water over her head and was verbally abusive. He wanted to control everything about her and she was raped continually. She was also arrested by the police in Turkey for going to a protest and they were less then gentle with her. So, did that wake her up to the barbarity of Islam? Nope. She still defends them even though she could have easily been killed and she was abused horribly. Moron. 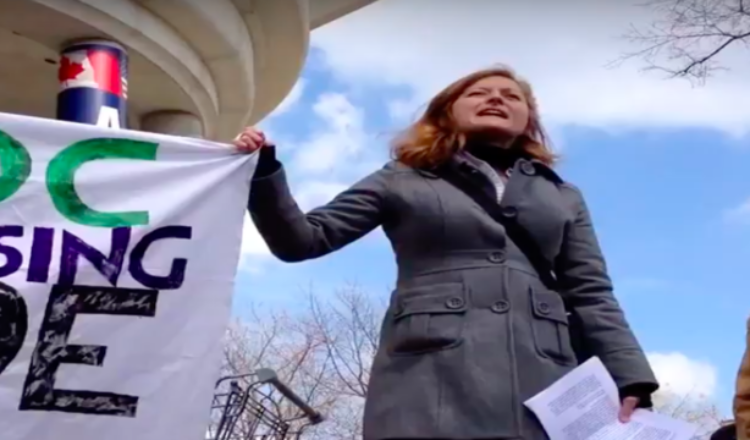 He offered a ready smile, engaging kindness, and intelligent conversation. He said all the right things to convince me that he cared about women’s rights and activism. In February, I decided to return to Turkey with the promise of love driving me forward. I couldn’t have known things would turn sour.

Then came our first fight. I had wanted to interview a local woman for an article on Syrian refugees. He did not approve. He knew the woman and did not like her, so he strictly forbade me from speaking with her. After I questioned his rationale, he yelled and stormed out of the room to go smoke a cigarette. I just stood in the middle of the room not knowing what to do. Of course, as a Western woman, no one had ever forbidden me from speaking with anyone else.

In the following weeks, I was violently pushed, blocked from leaving freely, and repeatedly told not to speak. If I spoke anyway, anger erupted. I endured threats that I would be burnt with cigarettes, flinching as he “faked” with his lit cigarette. I had to duck to avoid having sharp objects thrown at my face. I had water angrily poured over my head.

Unwanted sex? Rape? All the time. He did not stop to determine whether I consented to sex.

She didn’t initially speak of her experiences, she said, because she “did not want to feed into the narrative of Muslim men being aggressive.” Is she impaired? She must be, because that’s obviously what they are. Her protesting and denial of reality is going to get her killed at some point. She doesn’t care about the truth as long as her political agenda is served.

Macauley came out with Antifa in Kentucky just this last weekend. A fascist protesting others labeled as fascists. Anyone not on the left is an enemy to this woman. This woman is incapable of seeing what is going on around her. Her whole life is based on anger, hate and radicalism. What a sorry excuse for a human being. She’s stone stupid and suicidal, but she’s determined to hurt others on the way down. She’s a typical leftist. In John Hawkins’ new book, ‘101 Things All Young Adults Should Know’[3], he teaches in number 10 of the book, “People are what they are and probably are not going to change much once they reach adulthood.” This chick never grew up and justifies anything and everything. She is the epitome of a ‘useful idiot’.