A very bizarre and disturbing Facebook page exists to promote the satisfaction of Islamic female mutilation[1]. This does not sound satisfying nor fun, not even in a secret 50 shades way. 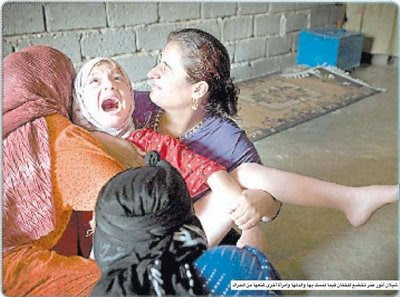 Female genital mutilation (FGM) or clitoridectomy is an Islamic tradition, rampant in the Muslim world.  Dissemblers and deceivers claim that FGM is cultural phenomenon, not religious. FGM is an Islamic cultural phenomenon. FGM is found only within and adjacent to Muslim communities (source: Gerry Mackie, “Ending Footbinding and Infibulation: A Convention Account”, American Sociological Review, 61(6), December 1996, pp. 1004–1005). This Facebook page by Muslimas proudly supports it.

Muslim women are treated extremely poorly. They’re covered up in hot heat, then convinced to mutilate their bodies and it makes no sense to me. I know every culture has their beliefs and practices, but this doesn’t seem enjoyable for women in the least. It seems quite the opposite.

Would an American woman ever try this? I don’t think so because it seems to partially remove a very hard to locate center of enjoyment. Not to sound too fresh, but judging by the picture above, this doesn’t look fun to anyone.