After centuries of lying low, Islam has reemerged as an existential threat to civilization. Its vast, decentralized army of maniacs seems unstoppable. Inevitably, driving trucks through crowds of innocent pedestrians will give way to chemical, biological, and even nuclear attacks. But the cult does have an Achilles heel: it depends on its followers believing that the unbalanced seventh century cut-throat Mohammad literally spoke for God. Destroying that belief destroys the enemy.

A weapon that could help accomplish this is in our hands. Back in WWII, Hollywood took America’s side against the enemy. Imagine if it did so again, and if the federal government would drop the P.C. B.S and admit that the enemy is not Islamic State, al Qaeda, or any other particular faction, but the underlying ideology that drives all of them. Films subsidized by the Defense Department could be cranked out one after the other telling the truth about Islam and its founder.

F. W. Burleigh, author of the highly recommended It’s All About Muhammad, could be on to something:

Imagine how [people brainwashed with a sanitized version of Mohammad] will react when they see their “prophet” recruit hitmen like a Mafia don to kill his critics, mass murder people who refuse to join his religion, enslave men, women, and children, and scream “Kill! Kill!” as he and his followers did when they attacked the caravans, towns, villages, and camps of people who rejected him and his cult. Imagine their shudders when they are shown verses of the Koran where Muhammad boasts of his criminal exploits. …

There is no end to the cinematic potential of the material. … A straight biopic would be great for starters, but Muhammad’s criminal doings can be dealt with from a number of angles. In the epilogue of my book, It’s All About Muhammad, A Biography of the World’s Most Notorious Prophet, I suggest putting Muhammad on trial for crimes against humanity. In this scenario, he is in the docket of the accused along with his lieutenants, as occurred with Saddam Hussein and his henchmen. Muhammad’s victims are resurrected to testify about what he did to them. The myth of Muhammad as God’s voice box is thus demolished by the people he murdered, despoiled, or enslaved. The real Muhammad is shown for the psychopath that he was.

The canonical material is so vast that it can also be broken down thematically into hundreds of docudramas, one-hour treatments of History Channel quality, all of them starring Muhammad, all of them entertaining and informative.

Naturally Muslims would respond the same way they have always responded to anyone challenging their delusions: with violence. But would we have let terror threats prevent us from making movies about Nazis?

The real problem is that before we can win the hearts and minds of Muslims, we have to win over Hollywood and the federal government, both of which aggressively embrace a delusional rainbows and unicorns vision of Islam that bears no resemblance to reality. Tinseltown will not side with America against Islam — and neither will Washington.

It is wonderful to finally be rid of the over-the-top Islamophile Barack Hussein Obama. But he was only a symptom of an enduring problem. Pre-Obama, George W. Bush responded to the Islamic atrocities of 9/11 by calling Islam a “religion of peace”; anyone with even a rudimentary knowledge of the history of Islam or of current events knew that to be an absurd lie. Post-Obama, we read this from Secretary of Defense James Mattis, in reference to a dead al Qaeda terrorist:

“The death of Qari Yasin is evidence that terrorists who defame Islam and deliberately target innocent people will not escape justice.”

Defame Islam? Yasin personifies Islam, as does every other terrorist going back to Mohammad, who proclaimed himself “victorious with terror.”

Mattis, and Trump, and all those in power in Washington in both parties should know this: one cannot defeat an enemy one does not understand. What Mattis says here only fosters the ignorance and complacency that has enveloped us as a thick fog for the last sixteen years.

You can stomp a cockroach on the kitchen floor, but there will still be a thousand more breeding inside the walls. Likewise, killing just one or just 100 Qari Yasins is almost futile. So long as even Mad Dog Mattis sucks up to political correctness, Islam will keep winning.

Milo Yiannopoulos creeps me out, but he sure got this right:

“Muslims are like the common cold and leftists are like Aids. It’s easy to fight off a cold… unless you have Aids.”

Even during the Crusades, when Muslims had overwhelming numerical advantages, they had a hell of time defeating Westerners on the battlefield. Nowadays they stand no chance at all. Terrorism is not conventional warfare by other means. It is propaganda by other means. It is only effective because of the message it sends, and how we react to it.

We won’t win this information war until we start fighting back. Propaganda can be defeated with truth. But to get to truth, you have to get past political correctness. 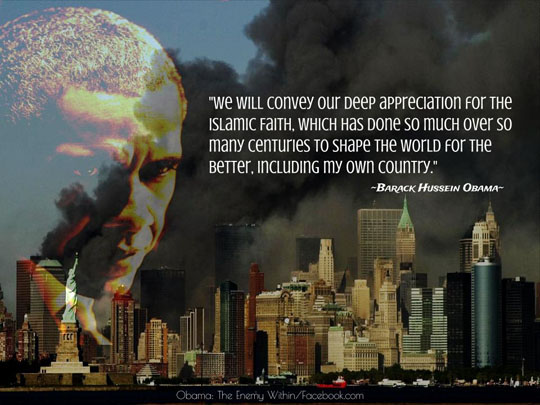 We’re still not rid of this sick, mendacious mentality.

Tips from Stormfax and Chad. Graphic compliments of Obama: The Enemy Within. Cross-posted at Moonbattery.