Ex-Muslim Maajid Nawaz is firing back at the Southern Poverty Law Center (who as long as I can remember has done nothing about poverty, let alone southern poverty) who labeled him an “anti-Muslim extremist.” I kid you not.

Nawaz went on Bill Mahar to put the organization on notice; he won’t be pushed around anymore. 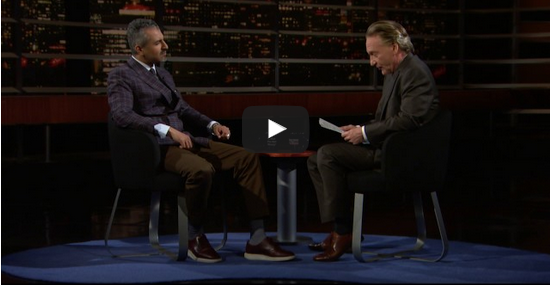 Nawaz wrote a book entitled “Radical: My Journey Out Of Islamist Extremism[2]” about his time as a Muslim. He is also featured on the Southern Poverty Law Center’s page “A Journalist’s Manual: Field Guide to Anti-Muslim Extremists[3]” which he claims is defamation of his character.

He has now decided to get lawyers involved.

At the time of his placement on the list, Nawaz penned a piece for The Daily Beast[4], blasting the organization for what he called “Islamsplaining.”

In a naively dangerous form of neo-Orientalism, the SPLC just arrogated to itself the decision over which debates we Muslims may have about reforming our own religion, and which are to be deemed beyond the pale.

Let us call it “Islamsplaining.”

In a monumental failure of comprehension, the SPLC have conflated my challenge to Islamist theocracy among my fellow Muslims with somehow being “anti-Muslim.” The regressive left is now in the business of issuing fatwas against Muslim reformers.

While on uber-liberal Bill Maher’s late-night Saturday show on HBO, Nawaz stated that he was tired of “well-meaning white men” deciding to label him an extremist because they are offended on behalf of another group of people.

“I’m sick and tired of a lot of the well-meaning… liberal and left-wing usually white men who decide that I am saying what they don’t agree with, don’t allow for me to say about my own community, my own religious heritage… So I’m gonna take them to court for defamation.”

After the show, Nawaz announced his plans to crowdfund the money he needs for his legal defense. This means you can help him put Southern Poverty Law Center in their place, which they have so desperately needed for some time now.

Will you be donating?