German Finance Minister in Response to Manchester: Christians Can Learn From Muslims

Considering Germany’s leading role in Islamizing Europe by importing vast numbers of Muslim welfare colonists, it might be interesting to hear what the German government had to say 2 days after the Manchester atrocity. Presenting Finance Minister Wolfgang Schäuble:

“It is fanaticism, not only in Islam, that leads to terrible crimes,” he said, speaking on German public radio station Deutschlandfunk Wednesday evening, when asked about the Islamist attack in which 22 mostly young people, including an eight-year-old girl, lost their lives.

As should be obvious to anyone, it is not fanaticism per se that makes terrorists wicked, but the evil cult they are fanatical about. Would a fanatical Quaker blow up little girls?

“‘Islam is part of Germany’ is a sober, factual statement,” the minister remarked, commenting on sentiments voiced by Chancellor Angela Merkel on more than one occasion – which are not shared by the majority of Germans.

“Anyone who denies this denies reality and is therefore not suited to being a politician, because politics begins with the confrontation of reality,” he added.

“Many human values are very strongly realised in Islam. Think of hospitality, and other things like, what is there… And also tolerance, I believe, for example.”

From the beginning, Islam has responded to those who refuse to knuckle under to it not with tolerance, but with violence. Mohammad dispatched assassins to silence doubters, and personally oversaw the torture and mass execution of those who resisted. Islam’s defining tradition of violent intolerance continues to this day. There have been well over 30,000 lethal Islamic terror attacks just since September 11, 2001. How many Christian, Hindu, or Buddhist terror attacks have there been?

The country’s rapidly growing Muslim demographic presents an “opportunity” for “Christians, and all who live in Germany”, Schäuble stated, adding: “We can learn from them.”

No functioning person could be dumb enough to believe a word of this crap. Schäuble and the rest of Merkel’s administration should be tried for treason.

However, it is true enough that Europeans have learned from the Muslims that their governments have imported. The main thing they have been learning is that excessive diversity is weakness, not strength — which is exactly why cultural Marxists promote it. 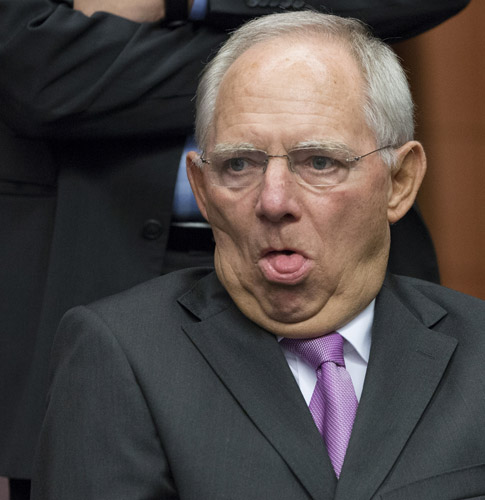 Schäuble choking on his own B.S.