A teenage girl was unable to compete in her high school basketball game because she refused to take off her hijab. The head official informed the coach that there was one rule the team had forgot to adhere to and if the girl refused to remove her head scarf, she would be unable to play in the game… 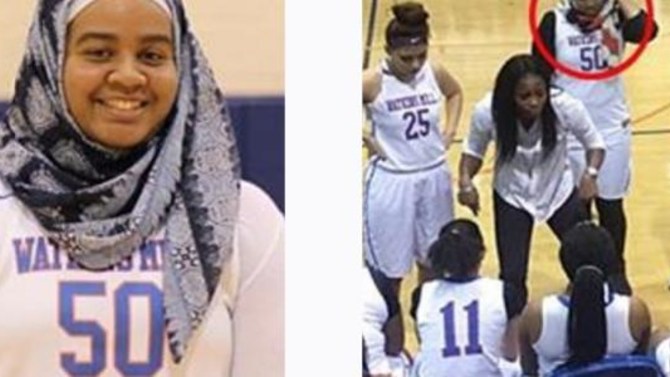 Teenager Je’Nan Hayes[2] had already played in the first 24 games of the season without anyone telling her coach about the rule, that appears in the National Federation of State High School Associations rule book and is regulated at the state level. On March 3, Coach Donita Adams wanted to make sure every girl played in the team’s first region final appearance in the game at Oxon Hill High in Prince George’s County. In this last game of the season, Adams had to leave Je’Nan Hayes sitting on the bench after being told about a rule their team missed.

This was Hayes first season playing organized basketball even though she is a junior. Wearing a hijab is part of her Muslim faith, but not a normal part of a basketball game which caused a clash of rules. When the head official informed the coach of a rule requiring ““documented evidence” that Hayes needs to cover her head for religious reasons, the coach was upset saying later:

“I didn’t even want to look down at Je’Nan in that moment. I had not yet told her that she wasn’t allowed to play in the game because of her headscarf.”

Of course, Hayes felt discriminated[3] against saying, “If it was some reason like my shirt wasn’t the right color or whatever, then I’d be like, ‘Okay.’ But because of my religion it took it to a whole different level, and I just felt that it was not right at all.”

The most unfortunate part is that her parents or the coach only knew some of the rules of the league and hadn’t taken the time to understand all the rules, especially those that would affect Ms. Hayes. Just as Hayes has a rule that her hijab never be removed in public and she’s aware of that, the league has just as much right to enforce their rules. This is far from discrimination because it was a set rule that those who wished to participate chose to ignore. Do you think that rules to wear a hijab are more important than league sport rules? Or are both rules equally important and should be adhered to fairly by everyone? One lesson learned here is always be prepared and KNOW the rules of the game, so you don’t get caught in a situation like this.