A school teacher is now attempting to work from home after receiving death threats from Muslim parents. The Islamic parents are reported to hate the teacher’s “western values” and even complain about the way her daughters are dressed in pictures posted in the teacher’s office.

The teacher, Trish O’Donnell of Clarksfield Primary school in Oldham, has reported that she’s been constantly bullied with verbal threats of violence and Muslim parents said they would blow up her car.

O’Donnell thinks the Muslim parents are attempting a “Trojan Horse[1]” in which the Muslims quietly enter and try to attack the school from the inside, changing it to a Muslim school.

A primary school headteacher has been forced to work from home by death threats from Muslim parents who hate her western values.

Trish O’Donnell, head of Clarksfield Primary School in Oldham, has endured ‘harassment and intimidation’ in the form of ‘aggressive verbal abuse’ and ‘threats to blow up her car’ from parents pushing conservative Muslim values.

It is feared they are making a ‘Trojan Horse’ attempt to Islamicise the school.

Parents have complained the way she dresses is ‘unsuitable’ and that pictures of her daughters in her office are ‘offensive’.

But now she feels her position is untenable due to the pressure from Muslim parents trying to change the school from within.

According to an Oldham council report, seen by The Sunday Times, she wrote that she had a ‘very strong reasons to believe that . . . a “Trojan Horse” agenda [is] being played out’.

And the head teachers’ union, the NAHT, said it was ‘supporting a number of members in the Oldham area with a variety of apparent Trojan Horse issues’. 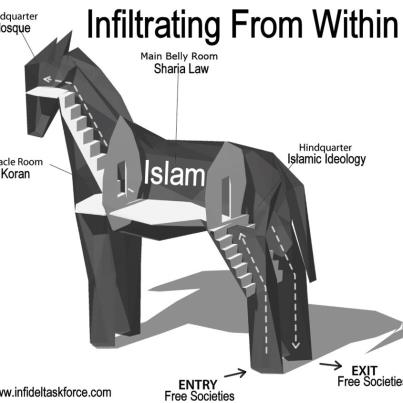 Here’s a swell idea. Why don’t the Muslims open their own school? Then they can run it the way they want, without Western values and there’s no conflict of interest or clashing ideologies.

Run your own school, teach whatever you want and everyone is happy.

Stop trying to infiltrate and take over, it’s not going to work.

Most people do not want anything to do with Islam.

People would have more respect for the Muslims if they simply opened their own school, did their own thing and stopped trying to push their religion on everyone else.

Open your own school and everyone is happy.