It’s Happening! Public Schools Indoctrinating Kids to Islam – Is This Our Future!? [VIDEO]

In yet another public school[1] in New Jersey, Islam is being taught to young, impressionable students as part of the curriculum. The school has been teaching students about Islam since the beginning of the year. They touched on Christianity and Judaism, but the overwhelming focus has been on Islam. One 13 year-old girl’s mother happened to see the assignment and was absolutely shocked by what her daughter was being taught in school. She tried to contact the superintendent of the school district, but of course, he doesn’t seem to have time to return her calls.

The school is teaching students that Christians were mean to Muslims during the Crusades and still treat them harshly today. You are kidding right? The Crusades were fought because of Islamic conquest… they were exterminating Christians, just as they are today. Except then, Christians were willing to fight back instead of being conquered. Islamists revise history to make Christians the evil ones and nothing could be further from the truth. Islam is a warrior religion. They spread by conquering others, taking slaves, raping and pillaging as they go. Muslims say they are treated harshly because Christians won’t convert to Islam. 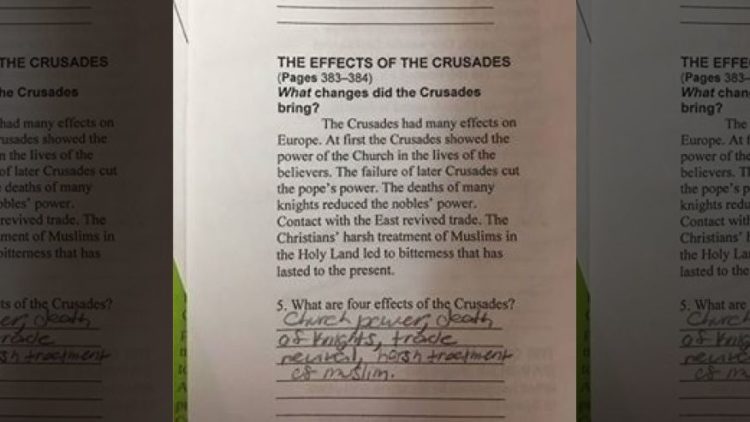 A classroom assignment on Islam says one negative effect of the Crusades is that Christians are still treating Muslims harshly.

Mrs. Light, of Westwood, New Jersey, was helping her 13-year-old daughter prepare for a World History test when she discovered some rather shocking lessons.

“The Christians’ harsh treatment of Muslims in the Holy Land led to bitterness that has lasted to the present,” one worksheet stated.

Another worksheet asks students to identify “one negative effect of the Crusades that has continued to the present.” The answer written on the worksheet – “the Christians harsh treatment of Muslims continues in the present day.”

“In this day and age when so many bad things are happening to Christians all over the world – they are basically saying Christians caused this, Mrs. Light told me. “This is just too much.”

I reached out to the superintendent of the school district, but so far he has not returned my messages.

Mrs. Light said the class has been studying Islam since the beginning of the school year. She said the students have also touched on Christianity and Judaism, but the lessons primarily revolve around the Islamic faith.

“It is indoctrination,” she said.

I blame the school AND the teacher. A teacher always has a principled choice on what they teach. What these lessons teach is akin to saying a rape victim asked for it. Christians are being slaughtered across the planet because they had it coming? It is indeed, sheer indoctrination.

It was the Muslim community, without provocation, that conquered Jerusalem from the Byzantines just a few years after Mohammed’s death. Tiny Israel is surrounded by Islamic nations that claim she doesn’t have a right to exist and her land should be given to them. They teach their children to become suicide bombers to take out Jews and infidels. ISIS kills in the most horrific ways and they are actually devout Muslims. Islamic violence is based on a traditional reading of the Quran. Schools are subjecting our children to Islamic teachings and Shariah law. This is another reason to get your children out of the public school system. America’s future is not Islamic. 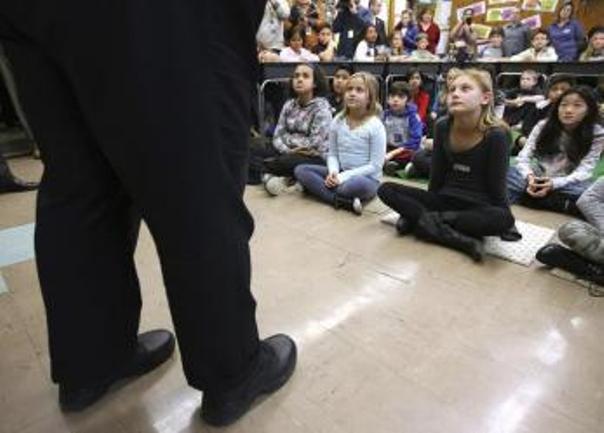