First off, can everyone just calm the hell down?! Before we start into this hot mess, let’s get one thing straight right off the bat:

NO ONE knows what is really happening, okay? Not the first tweeter, not the second, not the third, fourth and so on and so on… Now, read on to understand what I mean.

A huge fight broke out today – on Twitter[1], of course – over a photo of a Muslim woman who was both blamed and defended after strolling through a terror attack on Westminster Bridge while looking at her cell phone.

The pedestrian was wearing a brown headscarf and grey coat, and was captured holding one hand to her head while walking past a victim on the ground being treated on for his wounds.

She was picked apart by one social media user for supposedly appearing apathetic to yesterday’s attack that brought terror to London – but there were still others that defended her.

One Twitter user named ‘Texas Lone Star’ posted a picture of the woman walking past the hurt victim, criticizing her in a tweet for allegedly not caring.

He wrote: ‘Muslim woman pays no mind to the terror attack, casually walks by a dying man while checking phone #PrayForLondon #Westminster #BanIslam.’

But his tweet aggravated a lot of people to anger, with other users criticizing his comments and one even going as far if not further than he did, and calling him ‘the real monster here’. 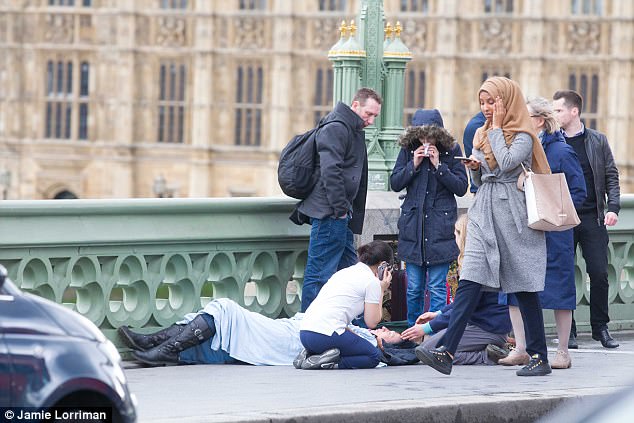 One named Vicky Forster felt the need to beat the twitter troll with some of her own twittering: ‘You are a complete embarrassing mess of a person. Kindly crawl back to the pond you came out of. Stupidity embodied.’

Lisa Scott also hopped on that bandwagon: ‘She looks terrified. Which she would be, most likely being British and bang in the middle of a terror attack.’

Really people? You all should lose your twitter accounts…