That didn’t take long. They barely have the blood cleaned up from the London Bridge massacre and already London has experienced more Islamic outreach:

A nursery worker was beaten up and stabbed by three girls as she walked to work in east London this morning.

The woman, aged in her 30s, was walking from Wanstead station to Little Diamonds nursery on Hermon Hill when the attackers came up behind her at just after 9.30am on Wednesday.

According to Karrien Stevens, who runs the nursery where the victim works,

“A staff member was coming to work when three Asian girls came up behind her chanting the Koran.

“They pulled her to the ground, kicking and punching her.

“One of them got the knife out and cut her arm.

“They were shouting about Allah, that and the Koran.”

Here’s how London authorities keep the terrorism problem under control:

It is not being treated as terrorist-related.

On the contrary, any violence inflicted on innocents in the name of Islam is terrorism. You don’t have to join al Qaeda to be a terrorist. All you have to do is believe in Allah, then go out and hurt someone to prove it.

The victim required stitches, and was left with broken ribs. The attack was reportedly random and unprovoked.

Looks like Sadiq Khan is right. Islamic violence really is “part and parcel” of urban life now — in London, anyway. 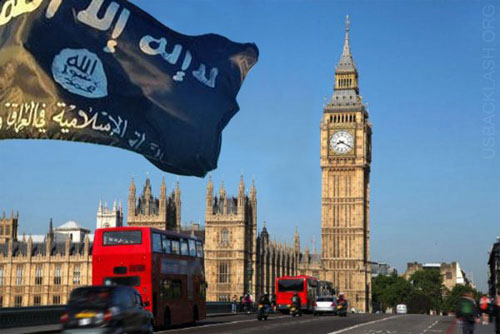 On tips from Stormfax and Kunta Khante. Cross-posted at Moonbattery.