Islam has some backwards views when it comes to women and that can cause problems in countries where people don’t still live like it’s 1499. For some Muslim men, seeing women dressed in normal clothes means that they are fair game for harassment, but that backfired wildly for this unemployed Muslim bodyguard[1]. 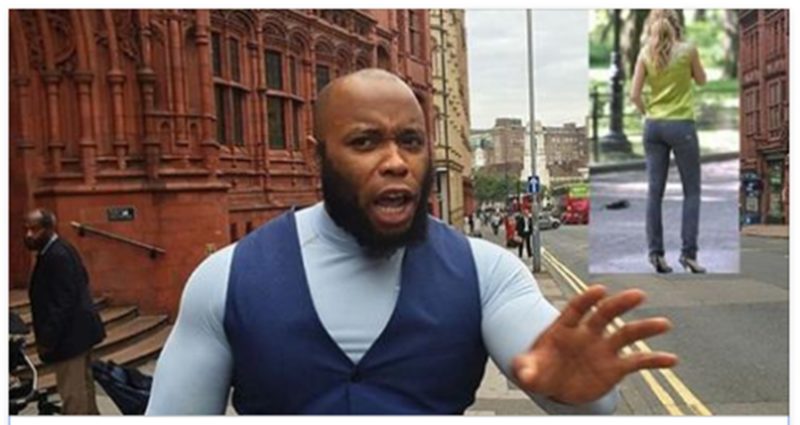 Noor Alneaimi was listening to a Christian preacher when she came across Krissoni Henderson, who was infuriated by Alneaimi’s outfit. Alneaimi was wearing skinny jeans, which Henderson thought were too tight, so he began verbally abusing her — and even threatened to blow her up.

Henderson called Alneaimi “Satan” and “a slut,” with the harassment drawing a huge crowd, some of whom began joining in. “How much do you charge for the night?” one man jeered. But with Henderson as the clear instigator, authorities sought him out and arrested him. He was charged with intentional harassment, alarm or distress and using racially aggravated words. It’s also alleged that Henderson shouted pro-ISIS comments during his tirade.

“It’s the Crown’s case that at the hands of Mr. Henderson this woman was the victim of religious and offensive words, including calling her a kafir — a derogatory term for a non-believer,” prosecutor Simon Brownsey said. “[He also said] he would follow her home and blow her up. At the time he wasn’t known to her and she has expressed concerns about seeing him again because of the threat. She was listening to a Christian preacher on New Street and the defendant was also present. He targeted Noor Alneaimi by observing she was wearing tight jeans and told her to take them off.”

Alneaimi also spoke during the trial, asking why he would say such horrible things to her. “I’m a Muslim and I have respect for all religions,” she said. “All of a sudden I could hear the defendant shout abusive language to passers-by,” she said. “He started calling females on the street prostitutes, predominantly white women, calling them sluts. One woman started crying and ran off.”

Henderson’s trial is still underway. What do you think his sentence should be if he’s found guilty?