Apparently the truth is offensive to Muslims, or at the very least, that’s what we’re lead to believe. How do we know this? Their reaction to a billboard which describes the facts of their Prophet Mohammed’s life.

The billboard, entitled “The Perfect Man” has stirred up some outrage from Muslim groups who are trying to raise money to put up their own sign which they claim will promote peace and kindness. 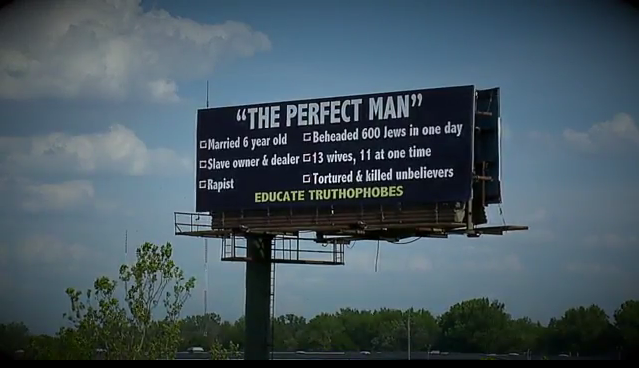 They claim the sign says hateful and “vile” things about Mohammad, but as far as I’m aware, nothing written on the board is a lie. Sure it may be unsavory, but that is who their Prophet was and that’s what he did in the name of his religion.

Farial Khatri told Fox 59 that she “was a little disappointed when I saw that” and says that while the Islamic Society of North America does “support free speech, but we do realize this is also rooted in bigotry.”

The truth is bigotry now? Instead of disparaging people for telling an embarrassing truth about your religion, why don’t you try to distance yourself from the beliefs and acts of Mohammad? Clearly he had no plans to live in peace under the name of Islam, so why not state that you disagree with his practice of Islam? Or are you called by your religion to defend a man who raped women and children and murdered people who did not believe as he did? If you do that, how can you ever take offense at a sign that merely lists his crimes? Instead of “disappointed” by it, you should be supporting it.

You can’t have it both ways; you cannot defend a man who did those things, yet disparage another man for bringing it to light.