Sharia law is coming to western civilization, whether we like it or not. This is especially true in Europe, where in England, a Muslim “preacher” was arrested for screaming at a woman on the street for wearing tight jeans. 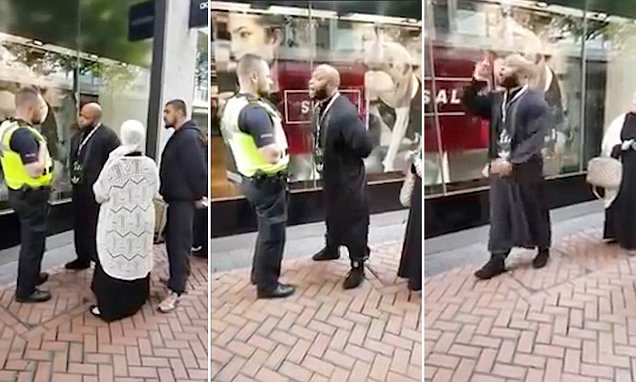 An Islamic street preacher has been arrested and charged after allegedly screaming abuse at a woman for wearing ‘tight jeans’ and shouting ‘Allahu Akbar’ in a police officer’s face.

Krissoni Henderson appeared to be caught on camera angrily confronting the officer – who was investigating a complaint made against the 31-year-old.

The unnamed policeman was called to New Street in Birmingham city centre at around 5.30pm on July 4 following a 999 call from a 38-year-old woman who said she feared for her safety after a verbal confrontation. She alleged she had been shouted and sworn at.

A video later appeared on social media of the West Midlands Police officer trying to speak to Henderson in connection with the allegation.

The following day he was arrested at his home in Birmingham’s Jewellery Quarter and, after being questioned, was charged with two public order offences.

… In the footage, a man alleged to be Henderson is wearing traditional Islamic dress and standing with another man and a woman.

‘Here is my witness,’ he appears to yell, gesturing to the woman, ‘if you want to arrest me arrest me.’

He vehemently explains that the woman who complained had walked up to him rather than the other way round, making him the innocent party.

‘Do you think I’m scared?’ he says skeptically to the officer who is trying to reason with them.

He then begins to shout with increasing force over the policeman: ‘Freedom of speech, we are not going to take your racism anymore. We’re not terrorists and we are not suicide bombers, throw your television in the dustbin. This is a free country and we can speak freely in public!’

He goes on to claim that the woman who complained had threatened him when she approached him.

But when the officer asks if he can give him the ‘common decency’ of not shouting over him the preacher continues to bellow his reasoning.

And as the policeman walks away slightly to attempt to defuse the situation he yells after him, ‘Go, go find some rapists!’

Again the officer asks for the ‘common courtesy’ of being listened to but the preacher repeats his argument of having a witness.

He apparently works himself as he confronts the fluorescent jacketed man, screaming that he is scared of no one but Allah and spitting ‘Allahu Akbar’ in the officer’s face.

Eventually the policeman turns to the crowd which has amassed and explains: ‘This young man has the right to assembly. He can stand here and shout and alarm. He can shock and offend…If he commits a public order offence… then he will be arrested.’

However it is clear the crowd is very much on the preacher’s side and as the officer walks away they begin to gather in around the man, jeering and heckling the retreating policeman.

‘Racist!’ the preacher allegedly shouts, ‘Go and find a paedophile and get out of my face!’

‘Simmer down,’ the man filming can he heard saying as the preacher continues to yell before the clip ends.

Isn’t it just so great that we have all of these Muslim extremists invading western civilization and bringing their insanity with them? Because this is exactly what we need: Muslim men screaming at random women on the street for not wearing “appropriate” clothes.