In contrast to the melting pot approach of days gone by, multiculturalism means our own culture gets incrementally erased, in accordance with cultural Marxist objectives. Steps in that direction have been taken in the Muslim colony Dearborn:

A Muslim man is suing Little Caesars for $100 million after he says he was served and then accidentally ate pepperoni made with pork, a food prohibited by Islamic law.

$100 million for putting normal pepperoni on a pizza. I wonder how much he will demand if he finds bacon in his BLT.

The complaint says Mohamad Bazzi of Dearborn ordered halal pizza twice from the shop on Schaefer in Dearborn. The boxes were labeled “halal,” but the pies inside were topped with regular pepperoni.

Maybe it is mislabeling a box that is worth $100 million. Or maybe the $100 question is, If you want to eat halal, why not choose something that isn’t traditionally made largely out of pork?

Bazzi’s attorney Majed Moughni took this opportunity to teach us a little something about Islam, informing us that eating pork is “one of the worst sins you can do.”

Whereas blowing up a bunch of little girls at an Ariana Grande concert is not sinful at all.

Not all value systems are of equal value.

Allegedly, Bazzi asked an employee to put a halal sticker on the pizza box. It might have made the scam less obvious if he had saved a halal sticker from a previous box.

Nonetheless, he will probably get paid off handsomely; no company wants to face the public’s wrath after failing to revere sacred Muslims. McDonalds was shaken down for $700,000 by Dearborn Muslims claiming to have been served non-halal food in 2011.

Regardless of the outcome of this get rich quick scam and/or crybully nuisance suit, many alive today will live to see an America in which most if not all publicly served food is required to be halal. When they push us, we move. Why should they stop pushing? 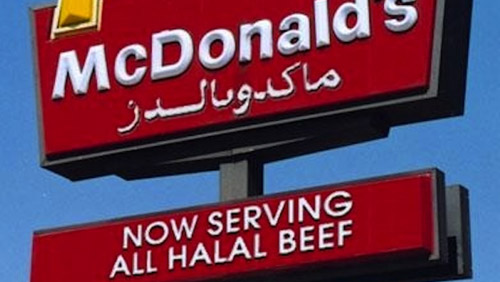 On tips from Steve T, Lyle, Bodhisattva, and Steve A. Cross-posted at Moonbattery.