Remember the psychotic Muslim woman who cut a child’s head off and then paraded around the streets of Russia carrying the head? Well, she had the audacity to ask to be released from prison — and when she did, the judge smacked her down hard. 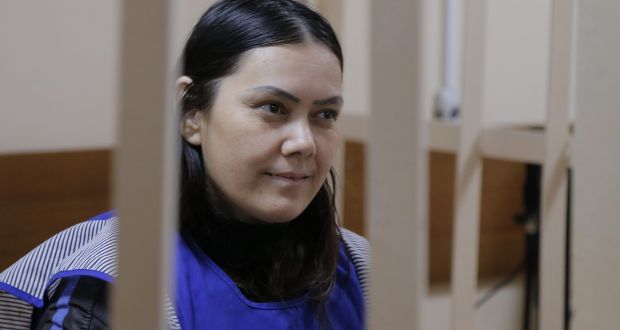 A Russian judge angrily slapped down the nanny who decapitated a four year old girl after she pleaded to be allowed out of a prison psychiatric hospital to serve her detention under house arrest.

Gyulchehra Bobokulova, 38, has claimed she was inspired to kill the helpless child in a copycat of gruesome jihadist beheadings which she watched online.

She also alleged she committed the atrocity on on 29 February in revenge for Vladimir Putin’s aerial bombardment of Muslims in Syria, saying she was ordered by Allah to decapitate the girl.

The case sent shockwaves around the world when she brandished Anastasia (Nastya) Meshcheryakova’s severed head in the street close to Oktyabrskoe Pole metro station minutes after murdering her with a knife in the girl’s family home.

Bobokulova strode around near the metro – Underground – station with the girl’s bloody head in her hand, shouting ‘Allahu Akbar’ (Arabic for God is Great) and threatening to blow herself up.

But the judge told the court if he freed her from the psychiatric clinic at Butyrskaya jail, she could go out and cut someone else’s head off.

The burka-clad babysitter told the judge in Moscow that she ‘does not like it in jail’ and pleaded to be allowed to return to her native Uzbekistan for treatment.

‘I want to go back to Samarkand, to be treated there,’ she said after being led handcuffed into the court.

Judge Evgeny Naidyonov asked her: ‘Treated for what?’

A tearful Bobokulova replied: ‘For my head. I want to go home, under house arrest.’

But the exasperated judge snapped back: ‘What home? Back to Oktyabrskoe Pole? In order to cut off someone else’s head?’

The judge retired for five minutes before returning to deny her request to be sent home to Uzbekistan.

He ordered that she remain under the control of Russian psychiatrists for another two months.

Well, that was clearly the right call — no one in their right mind would ever let that monster walk free again. What’s insane is that she actually thought he might say yes!