Mike Hager, who claimed that his mother was unable to enter the USA and receive medical treatment because of Trump’s travel ban, even though she died before the ban was enacted, is not the only unscrupulous person to exploit that ban to achieve a coveted place on the Hate Hoax List. Ballyhooed Olympic athlete Ibtihaj Muhammad has joined him:

Muhammad, a lifelong American citizen, claimed in an interview last week that she was detained “just a few weeks ago” by U.S. Customs and Border Protection agents. She said she was held for two hours without explanation.

Her remarks on Feb. 7 earned her an entire news cycle, as several journalists ran with reports suggesting, and alleging outright, that the American Olympian had been ensnared in the president’s executive order temporarily barring immigration from seven Middle Eastern countries.

When asked if she knew anyone directly impacted by the travel restrictions, Muhammad responded,

“I personally was held at Customs for two hours just a few weeks ago. I don’t know why. I can’t tell you why it happened to me, but I know that I’m Muslim. I have an Arabic name. And even though I represent Team USA and I have that Olympic hardware, it doesn’t change how you look and how people perceive you.

“Unfortunately, I know that people talk about this having a lot to do with these seven countries in particular, but I think the net is cast a little bit wider than we know. And I’m included in that as a Muslim woman who wears a hijab.”

A Customs official confirms that she was detained. It was on a totally random basis, and for less than an hour.

Muhammad didn’t put a hard date on when she was detained by Customs. It’s also probably worth noting that she is an outspoken Trump critic, and that she is extremely displeased with his immigration order.

Time magazine’s Motto, the Independent, the Daily Mail, the New York Daily News, the Hill, Sports Illustrated, and of course aggressively leftist ESPN all published outraged articles stating or heavily implying that Muhammad was subjected to this horrific inconvenience as a result of Trump’s travel ban, which was instituted on January 27.

The problem with this particular news cycle is that Muhammad was detained in 2016, weeks before Trump had even been sworn in as America’s 45th president.

The president at the time was the avidly pro-Muslim Barack Hussein Obama.

Journalists ran with her deceptive story without checking out dates or corroborating it with Customs because it advanced their shared ideology.

Muhammad elaborates on her ordeal:

“It’s really hard. My human response is to cry because I was so sad and upset and disheartened — and just disappointed. At the same time, I’m one of those people who feels like I have to be strong for those people who may not be able to find that strength.

“I feel like I have to speak up for those people whose voices go unheard. It was a really hard two hours, but at the same time, I made it home. I try to remember to be positive and to try to leave all these situations, even if they may be very difficult, with love. I think that we will come out on top as women, as people of color, as Muslims, as transgender people, as people who are part of the disabled community — I think that we’ll come out on top.”

As you can see, Ms. Muhammad is a moonbat, just like the lamestream media propagandists who hyped her crybully hoax.

Don’t hold your breath waiting for errata from the publications that pushed this misleading story. 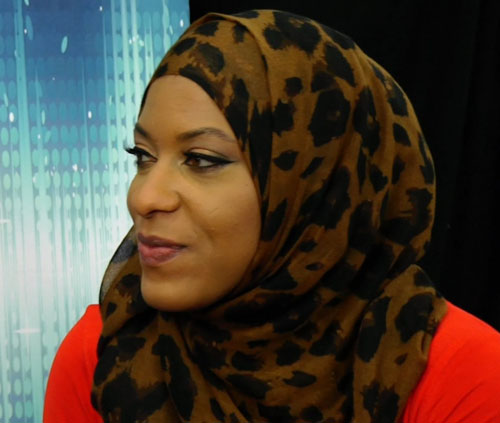 Ibtihaj’s story was too good to check.

On a tip from rpp618. Cross-posted at Moonbattery.