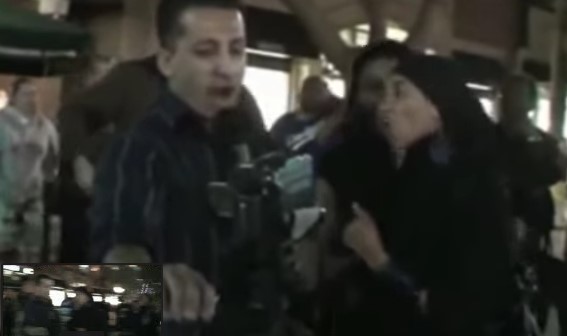 Louis Lionheart was just preaching along, minding his own business, hanging out with a small crowd in California. That’s when the two savagely rude, good for nothing Muslim women physically assaulted him simply because they did not agree with what he said.

America has Freedom of Speech, but not freedom from consequences. So if you say something that people dislike, then you might get punched for it. However, people punching others over disagreements should remember that if you punch someone, that turns into a court date and you might spend a few nights in prison.

Let’s watch the video of Louis Lionheart being attacked by two savage Muslim girls who should be in jail right now.

Skip to about 4:20 to see the Muslim girls get triggered and go on the assault.

Politichicks[2] – In response to this Islamic barbarism against Christians, and our government’s and media’s shameful silence about it, the Glazov Gang is running one of its most popular episodes: a program joined by Louis Lionheart, a Christian preacher who engages in open-air debates, dialogues and evangelism on 3rd. Street Promenade in Santa Monica, California.

Louis came on the show to discuss the attack that occurred on him on 3rd St. when he dared to tell the truth about Mohammed and Aisha.

Do you know how many people annoy me on a daily basis? How many have I punched? None. Why not? Because it’s a law that says you can’t punch people for no reason and not liking what someone says is not a good reason to assault someone.

What is it with these chicks who think they can barge their way up to the microphone and steal the show? They can’t, but they try all the time. They need to take their rotten selves somewhere else and remember who they’re messing with.

From interrupting Bernie Sanders to stealing this guy’s light in the night and then punching him – they need to go to jail for a few nights.

Spend a few nights in a pretty jumpsuit with some crack addicts laying around touching you in places you don’t want to be touched. Sounds terrible, right? The Muslim girls wouldn’t like to be violated, right?

Then don’t violate other people with your fists, just because you aren’t happy with what someone is saying. Hitting someone because of the words they said is still breaking a law.

Just because someone’s talking, that doesn’t mean you need to listen; walk away.

Islam is the religion of peace, right?