Massive face palm.[1] The Brits win with Brexit and THIS is who they pick to lead them out of the darkness? They. Are. Doomed. So very stupid it deserves a Darwin Award in its very own class.

The newly crowned Prime Minister, Theresa (moronic) May, wants the world to know, just as Obama does, that there is absolutely nothing Islamic about ISIS and they aren’t a state. Except for that little itty bitty detail that they follow the Quran, as does the Religion of Peace, which in fact, makes them ISLAMIC. She has no spine, is brain dead and is totally corrupted. Well done Brits! 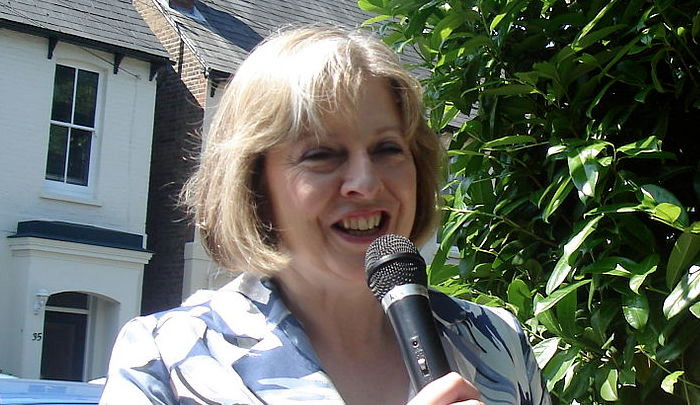 Just the other day we talked about how Europe is kowtowing to violent, rapey Muslims (read SWEDEN: Muslim Refugees Rape Two Girls. No Punishment…[3]). Because political correctness. The UK’s new Prime Minister, Theresa May, exemplifies that European wimpiness towards Islam in the video below. Like Obama, Madam May refers to the Islamic State as being super non-Muslim and non-statey. It’s a bit of a multiculturalist train wreck.

The terrorists who murdered David Hayes like to call themselves the Islamic State. But I will tell you the truth. They are not Islamic and they are not a state. Their actions have absolutely no basis in anything written in the Quran. This hateful ideology has nothing to do with Islam itself… We know that Islam is a religion of peace and has nothing to do with the ideology of our enemies.

Let me get this straight… May is the best you could do? She’s telling the UK to divorce ISIS from Islam when any fool knows they are one and the same. As Brits see their women raped and their citizens beheaded, she wants them to embrace the religion of pieces. How very suicidal… literally.

This woman says she is telling you the truth… you know you are being lied to when a politician starts with that phrase. It’s a given. Brits see Jihadists every day now. The country is lousy with them and has basically been conquered from within. But she’s here to tell them, don’t believe your eyes. Just be a good little drone and believe what politicians tell you to believe.

ISIS IS ISLAM. They hate the West and infidels and it doesn’t matter what May, Merkel or Obama tell you… that is what is the real truth and what is happening all around us. Just follow the screams, blood and body parts and you’ll find ISIS.

Europe is divided. The Finnish MP gets it as do other leaders who are speaking out. Unfortunately, those with the most power and sway are backing Islamists and bringing more in. They want open borders and free ranging Jihadists. It is a political power move where we are merely pieces on a chess board and if we get taken or knocked over, these so-called leaders just make another move OVER us. Britain had better get a new leader and fast or the only future they have is one of darkness that will be subservient to the Caliphate and global elitists like May.