Laura Ingraham and Brigitte Gabriel[1] absolutely eviscerated Linda Sarsour and an imam for justifying her treasonous and defamatory language in a speech she just gave at the Islamic Society of North America. In that nifty speech, Sarsour invoked Jihad, specifically against President Trump. She also called for Muslims to form their own society in America and not assimilate to ours. She’s calling for Sharia law. Ingraham says if it weren’t a sitting President that she said these things against, they could sue for defamation. Why should that stop Trump? Sue away and have the Secret Service look into this woman. She’s an open threat.

Sarsour defends and supports ISIS and the Muslim Brotherhood. She is a raving anti-Semite. She has family members who are in prison as terrorists. And she knew exactly what she was calling for when she called for Jihad against Trump and his administration. She tried to pull off the ‘struggle’ bit for Jihad, but she’s no idiot… she’s calling for violent revolt against infidels. She slandered the President as a white supremacist and an Islamophobe. She is an Islamic supremacist and supports those who want terrorism, blood, death and chaos in our streets. All for the Ummah – outside and apart from anything and everything that is American. 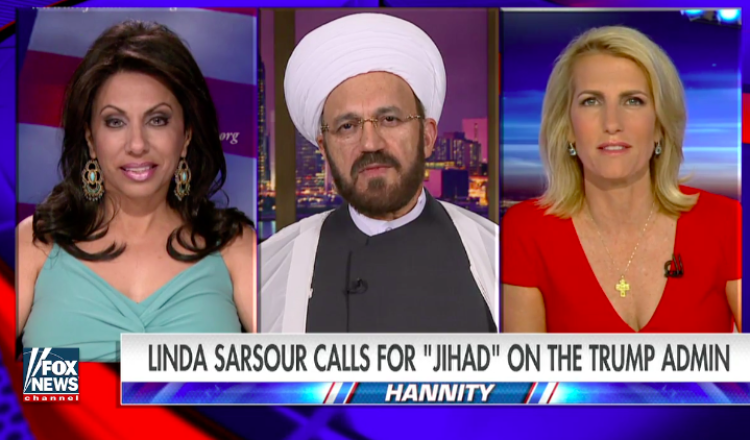 Pro-sharia activist Linda Sarsour knew exactly what she was doing when she declared “jihad” against President Trump and urged Muslims to resist assimilation.

That’s what Fox News commentator Laura Ingraham and a growing chorus of Muslims and Islamic scholars said in response to leftists claiming Sarsour did not mean “jihad” when she said “jihad.”

The brouhaha erupted after Sarsour invoked Allah and declared jihad[4] on President Trump, whom she slandered as a white supremacist and an Islamophobe. The anti-Semitic activist made the comments while speaking at the annual Islamic Society of North America convention in Chicago.

“When we stand up to those who oppress our communities, Allah accepts that from us as a form of jihad,” Sarsour said.

“As the Muslim community in these United States of America, we have to stay perpetually outraged! Our No. 1 priority is to protect our community. It is not to assimilate.”

Imam Mohammad Ali Elahi defended Sarsour hotly and called Gabriel a hate monger. Which is rich, because that’s not true, except on his end. He knows damned well that Sarsour’s call for Jihad is a call for Islamic extremists to commit violent acts against infidels and to embrace Shariah law. “She’s a sophisticated player,” Ingraham told Fox News. “That was meant to incite Muslims to whom she’s speaking.” That she is… she is incredibly dangerous and evil.

Both Ingraham and Gabriel said that Sarsour was inciting violence and hatred. Exactly right. What Sarsour is doing is a call to revolution by Muslims in this country. It is exactly what is being done in Europe and Canada. It is the ultimate enemy within. She is advocating a coup and a violent overthrow of our government and it should not be allowed. Meanwhile, instead of reporting on an impending threat to our nation, the press is obsessed with a gif of Trump beating up CNN. Perspective y’all. Maybe it’s because they share the same sentiment with Sarsour… a hatred of America AND President Trump.

I love being lectured by non-Muslim, non-Arab speaking leftists about the true meaning of Jihad. Useful idiots for the radicals.

Linda Sarsour doesn't even have to hide her radicalism anymore. She can spew anti-Semitic hatred and promote jihad right out in the open now