The liberal media constantly tries to pass on the message that Israel is an unjust aggressor, while Palestinians are the poor victims who are being slaughtered mercilessly by the big bad Jews. Of course, the media isn’t likely to point out the inherent violence that is endemic among the Palestinians, such as the fact that they are more than happy to send their kids off to the death, as long as they take an Israeli or two out with them. 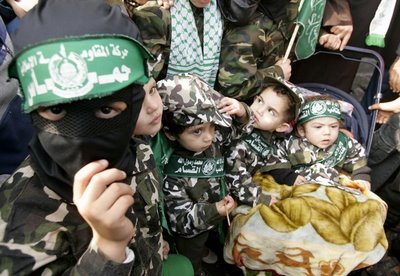 A Hamas spokesman announced that Hamas had manufactured 250,000 hand grenades.

These would be given to Palestinian youth to use to fight Israel instead of rocks.

“The military industry of al-Qassam has manufactured a quarter million hand grenades which will be in the hands of our youth, and with which they will stone the occupation’s soldiers instead of with rocks.”

There is something incredibly disturbing about a culture that glorifies death so much that they’re even willing to sacrifice their children to its altar. Even more disturbing, though, are those who are willfully ignorant to this reality and choose to not only look the other way, but speak out on their behalf against the one nation in the Middle East that is a functioning, fair democracy and wants nothing more than to be allowed to exist in peace.