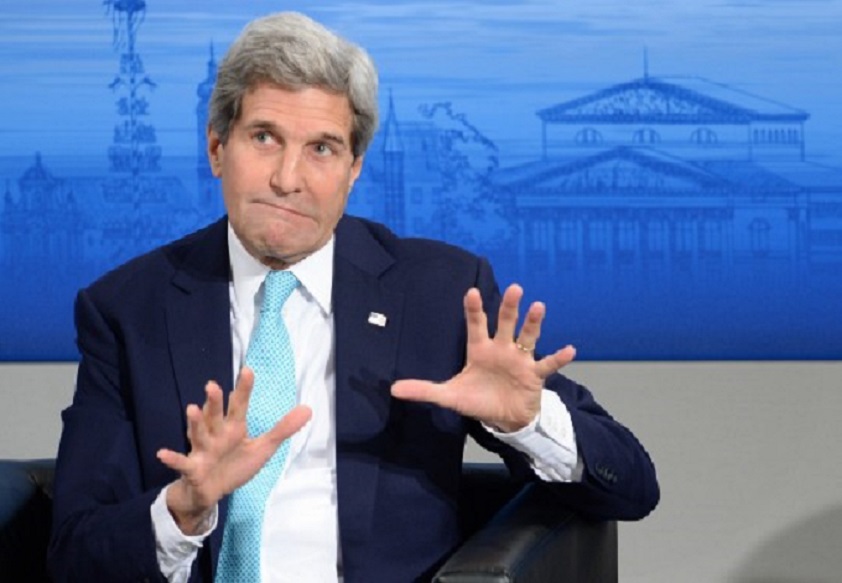 The outgoing Team Obama has made a hash of the Middle East. They blew off the Iranian Green Revolution. They blew off the Arab Spring, right up till it hit Egypt, then they messed that up, even going as far as to back the Muslim Brotherhood candidates. They started a war in Libya to supposedly deal with the civil war and “protect” civilians (more like to protect the oil flowing to France and Britain), then left half the country a mess and in the hands of terrorists. Then there’s Syria and the utter incompetence of Obama’s policies. They saw the rise of ISIS and did little. Squishy policies on Iraq. The foolishness of the Iran deal. And, of course, their heavy handed policies towards Israel. There’s supposedly a transcript[2] of the Obama administration working with the Palestinians on the anti-Israel resolution from the anti-Semitic United Nations.

So, now we have John Kerry

(Bloomberg[3]) U.S. Secretary of State John Kerry will offer a “comprehensive vision” for how Middle East peace can be achieved in a speech Wednesday in Washington, as Israel steps up its response to a censure from the United Nations over the construction of settlements in the West Bank.

With barely three weeks left in the Obama administration, Kerry will lay out his plan as tensions over Prime Minister Benjamin Netanyahu’s policies threaten to leave Israel more isolated internationally. Along with the Kerry speech, France is gathering dozens of foreign ministers in Paris on Jan. 15 to discuss the conflict. Israeli officials say that could result in a proposal they view as unfavorable, which may then be taken to the UN for a seal of approval.

The U.S. last week broke with tradition and decided not to veto a UN Security Council resolution condemning the West Bank settlements. Israel has already moved to limit ties with countries that voted for the resolution, rebuked member states’ representatives, recalled ambassadors from co-sponsors New Zealand and Senegal and pledged to cut off nearly $8 million in funding to UN institutions.

Kerry, describing himself as a “lifelong friend of Israel,” defended the U.S. decision to abstain on the vote in a Dec. 23 statement, warning that the possibility of a two-state solution to the Israeli-Palestinian conflict “is now in jeopardy, with terrorism, violence and incitement continuing and unprecedented steps to expand settlements being advanced by avowed opponents of the two state solution.”

Lifelong friends of Israel do not do that to an ally, especially when it is Israel constantly under assault from people who hate Israel and hate Jews. It’s the Palestinians and other Middle East players who are constantly attacking Israel, particularly civilians, with guns and bombs and rockets. Yet, rarely does the United Nations condemn the Palestinians, which are essentially run by a political party which grew from a terrorist organization.

And, tell me, from your personal experience, if someone is slamming you, is complaining about you to the boss, is bad mouthing you, do you work with them? What reason is there for Israel to work with the people who hate them, who hate Jews, and want to take away the land Israel won in wars they didn’t start?

Perhaps the United Nations, and Team Obama should worry more about the spread of radical Islam.