Simply and devastatingly powerful.[1] Benjamin Netanyahu spoke forcefully for Israel at the United Nations today. He spoke to a half empty chamber, with members in the audience smirking at him. They seem to find humor in the potential of Israeli and American deaths. Just evil. Netanyahu spoke out against the abhorrent Iranian nuclear deal which gives a green light to the mad mullahs and their nuclear war fantasies. He spoke of the utter silence as the UN stood by and watched as Iran prepared again for the annihilation of the Jews; then he paused for a solid 45 seconds of deafening silence to level his accusatory stare around that room. If looks could kill and rightly so. 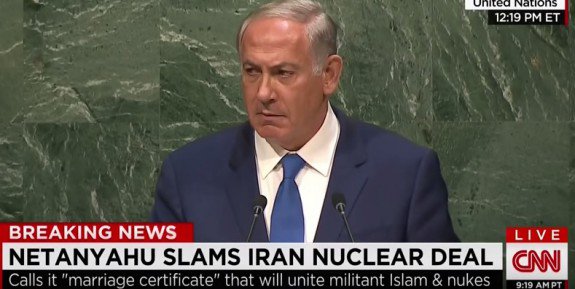 Israeli Prime Minister Benjamin Netanyahu blasted the United Nations on Thursday for its “deafening silence” in the wake of Iran’s threats to exterminate his country, followed by 45 seconds of silent glaring at the General Assembly.

Netanyahu used his speech to sharply criticize the Iran nuclear deal led by the Obama administration, maintaining his longtime arguments that the agreement would pave Iran’s path to a nuclear weapon and allow it to make good on its constant threats to destroy the Jewish state. The U.N. Security Council unanimously endorsed[3] the deal in July.

The Iranian Supreme Leader Ayatollah Ali Khamenei announced earlier this month[4] that in 25 years, Israel would no longer exist, and he praised his people in July for demanding[5] death be brought to the U.S. and Israel.

“Seventy years after the murder of 6 million Jews, Iran’s leaders promise to destroy my country, murder my people and the response from this body, the response from nearly every one of the governments represented here, has been absolutely nothing,” Netanyahu said. “Utter silence. Deafening silence.”

Netanyahu then looked slowly around the room with a glare fixed on his face, and there wasn’t a sound in the chamber. The U.N. has been hit[6] with charges of anti-Semitism[7] on numerous occasions.

The nuclear deal provides sanctions relief to Iran, the world’s largest state sponsor of terrorism[8], in theamount of $100 billion[9]. It is opposed[10] by a majority of the American public.

Seventy years after millions of Jews were murdered by monsters, the world is gearing up to do it all over again. This time they started with the Christians and the largest genocide the world has ever known of the followers of Jesus Christ is now taking place. The Jews are next on the hit parade as globalists seem to have decided to let radical Islam and communists rule the world. Russia and Iran are now fighting with Assad getting rid of his enemies. But that is only the beginning. Syria is the gateway to the Middle East for them… and it opens doors in Europe for conquest. We are now seeing the true beginnings of a world war and the US is nowhere to be found. Except of course when we are writing a check to Iran for $150 billion to fund the largest purveyor of terrorism on the planet. One who is eager to nuke both Israel and the US. Obama and the UN will have the blood of millions on their hands and will revel in it. Netanyahu is a brave man who fears for his country and fellow Jews. Where is everyone that swore they would stand with tiny Israel? She stands alone and the wolves are at the door, but so is God and He will not abandon His people in their hour of need. Silence in the face of utter evil… no words are necessary.