Trump is keeping a close eye on the countries that voted against the resolution to declare Jerusalem to be the capital of Israel. And he’s keeping an eye on the purse strings. 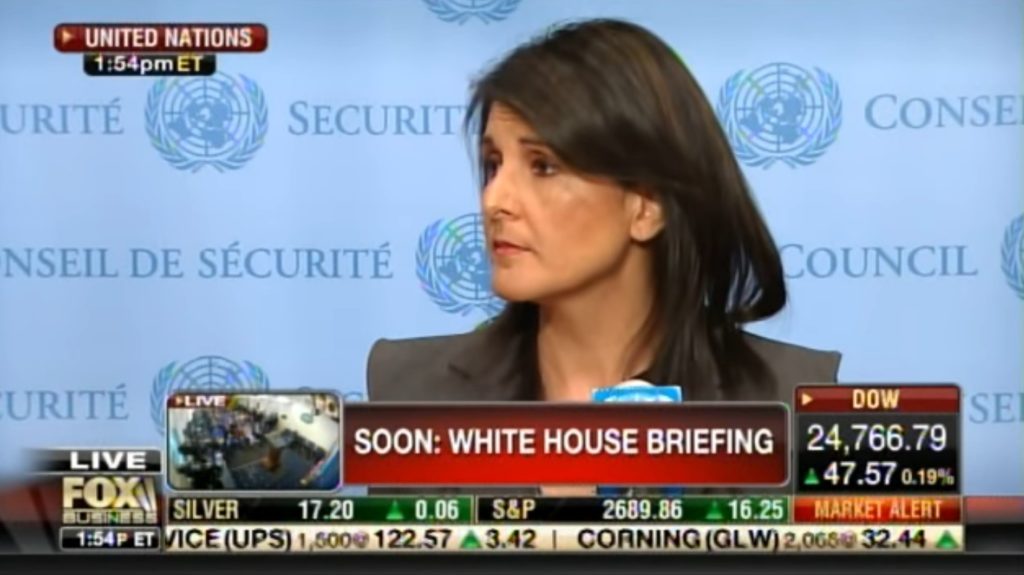 With good cop Nikki Haley and bad cop Donald Trump, the current administration is very effective in reminding fellow United Nations members that it’s America that’s paying for the lion’s share of their little projects. Recently Nikki Haley spoke to a press conference concerning UNRWA, or the United Nations Relief and Works Agency, which deals with assisting Palestinians refugees. The agency is supposed to be a stop-gap measure that helps Palestinians as long as they are acting in good faith, and the money is supposed to keep them supported if they are working on returning “to the negotiating table[2]” with Israel to talk peace.

While Haley is a strong voice at the UN she is a calmer voice than Trump who makes the same points, but in a much more blunt fashion.

When a reporter asked Ambassador Haley a loaded question, looking for her to become defensive in her support of Jerusalem and Israel, she responded that she is not responsible for defending herself to other countries for the American vote for the move to Jerusalem because she is there to represent the interest of Americans, who also support the move to Jerusalem. In fact, she is proud to support the resolution despite push back from almost every other country. She tacked on a personal message from Donald Trump in terms of the amount of funding America contributes to both the UN and to the UNRWA:

“Trump doesn’t want to give any additional funding until the Palestinians agree to come back to the negotiation table, and what we saw with the resolution was not helpful to the situation.”

In other words, we’re paying for your projects, so we expect a bit of respect and support.

It was not clear whether Haley meant that Trump will not grant additional funds to the UN, or to the UNRWA specifically, unless conditions are met and peace talks resume, but Trump had previously threatened specifically to pull aid from countries who do not support the resolution that Jerusalem is the capital of Israel.

“The President will be watching this vote carefully and has requested I report back on those who voted against us” || The letter @nikkihaley[3] sent tonight to UN members ✉️: pic.twitter.com/nPl8ilQLxM[4]

This is what Trump had to say last night after Haley gave her interview:

It's not only Pakistan that we pay billions of dollars to for nothing, but also many other countries, and others. As an example, we pay the Palestinians HUNDRED OF MILLIONS OF DOLLARS a year and get no appreciation or respect. They don’t even want to negotiate a long overdue…

…peace treaty with Israel. We have taken Jerusalem, the toughest part of the negotiation, off the table, but Israel, for that, would have had to pay more. But with the Palestinians no longer willing to talk peace, why should we make any of these massive future payments to them?

Here is a short, one-minute video from Haley answering the question and mentioning that the UN’s purse may get a whole lot lighter if more countries don’t start agreeing with their biggest source of funds: