Note to Israel: Obama is Not Your Friend 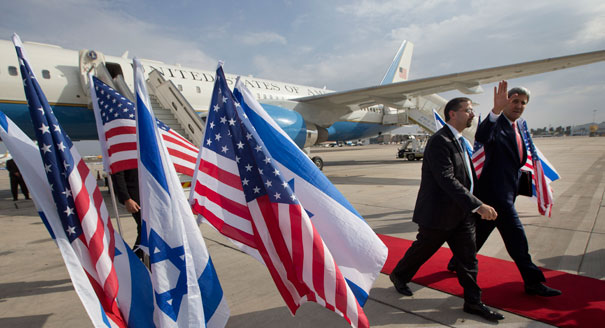 In fact, he’s your enemy and always has been. The rhetoric on both sides now has sunk to a new low and the vitriol is spilling over with name calling, jabs and public displays of distaste for each other. While Obama and his Islamic infiltrated government are doing all they can to buy time for Iran to complete their nuclear preps, they have also been stalling Israel and the world claiming just the opposite. How Progressive of them – how very, very evil. Here is one of a slew of examples of the clashes going on[2]:

A well-regarded Obama foreign policy surrogate with close White House ties, Colin Kahl, and the best-known media voice for pro-Israel forces in Washington, Josh Block, got into a nasty Twitter tangle over the weekend that laid bare how caustic the Iran debate has become between the two staunch allies.

“As usual, U don’t know what UR talking about & R advocating max alt[ernative] that’ll lead 2 war,” wrote Kahl, a top Pentagon official during Obama’s first term and the co-chairman of the president’s foreign policy board during his 2012 reelection campaign.

The thin veneer of diplomacy between the US and Israel is cracking and their long friendship is cratering, all because of Marxists and Islamists, who America knowingly let take control. Now these same players are on the verge of destroying America without a shot fired and are doing their damnedest to get Israel wiped off the map. America has always been a friend and staunch ally to God’s chosen people — now we have turned our back and are actively arming her enemies. Not to stand, is to stand and we will pay a monstrous price for this betrayal. A sharp division lays between the American people who support Israel and our Marxist President who bears them ill will:

The new conflict comes in the wake of a series of pointed disagreements between President Barack Obama and Israeli Prime Minister Benjamin Netanyahu in recent years over issues like the Israeli-Palestinian peace process and the U.S. response to the Arab Spring movement.

“It’s the worst I’ve ever seen,” said Leslie Gelb, president emeritus of the Council on Foreign Relations. “The government officials on both sides aren’t going to say they’re enraged, but they are, and their supporters will tell you that. People on the fringes in Israel are saying it, supporters here are certainly saying it and Obama supporters are saying it, but not with a swipe at Israel.”

Rumor has it that Obama and Netanyahu are no longer speaking. Both sides deny it, but I absolutely believe it. Obama’s minions are saying if a deal is not reached (which in essence gives everything to Iran and nothing to Israel), that war will follow. You morons… war will follow any way. Do you really think with the hate that Iran and the rest of the Islamic world have for Israel, that when they get nukes they won’t use them? No one is that stupid. So, the ones supporting the ‘deal of the century’ are the ones who hate Israel and want to see her annihilated. Et tu America?

As France is now standing by Israel and the Saudis are joining them, a new alliance is forming and we are on the wrong side. One only has to listen to the hate from Iran to see how emboldened they are now[3]:

French government spokeswoman Najat Vallaud-Belkacem told reporters that Hollande’s Cabinet discussed the Iran nuclear dossier just hours before negotiations between Iran and six world powers were set to resume in Geneva. She said, however, that France still hopes for a deal and its position has not changed in the talks.

Hollande was referring to comments attributed earlier to Ayatollah Ali Khamenei speaking to a gathering of the Basij force, which is controlled by Iran’s powerful Revolutionary Guard. In them, the Iranian leader referred to Israel – “the Zionist regime” – as “the rabid dog of the region.”

The world is acting like a bunch of little canines licking at the heals of Ayatollah Ali Khamenei. What is wrong with everyone? You are begging to be subjugated and conquered. It’s as if the world wants a new dark age in the very worst way. This same terrorist monster is now lecturing America:

Khamenei said he would not “interfere in the details of the talks,” in a clear nod of support for the government of Iranian President Hassan Rouhani, which has opened historic exchanges with the U.S. However, Khamenei also said the main goal is “stabilization of the rights of the Iranian nation, including nuclear rights.”

“There are red lines. There are limits. These limits must be observed,” the supreme leader told a gathering of the Basij force, which is controlled by Iran’s powerful Revolutionary Guard. “We have told the authorities, and they are required to observe the limits and should not fear the blusters of the enemies and opponents.”

Khamenei also blasted what he called the U.S. government’s “warmongering” policies, including threats of military action, and he said sanctions cannot force unwanted concessions by Iran. At the same time, Khamenei said that his country has “no animosity”‘ toward the American people and seeks “friendly” relations.

“Instead of using threats, go and repair your devastated economy so that your government is not shut down for 15 or 16 days,” he said in a reference to the recent U.S. government closure amid a congressional budget standoff. “Go and pay your debts.”

His complex message reflected Iran’s internal divisions over the nuclear talks and outreach to the United States, which broke ties with Iran after hostage-takers stormed the U.S. Embassy compound in Tehran in 1979 the wake of the Islamic Revolution.

All the while, this cur knows Obama is already kneeling before Iran. Khamenei considers his posturing that of a warrior about to crush his enemies. He will settle for nothing less than the obliteration of the Great and Little Satans, excluding those of course who bow before Islam such as Obama and his cohorts.

Obama in now pleading for more time for Iran[4]. What? So, they can finish nuke development? All the better to bomb Israel with? He’s using diplomacy as the ultimate delay tactic and has for years. He uses the same tactics Islam does and that should tell you something. We are out of time — period and Obama knows it. He is not stupid or incompetent… he knows exactly what he is doing.

Valerie Jarrett (aka the Night Stalker) struck a deal with Iran a year ago[5]. And even before then this was already arranged. Jarrett’s family is from Iran. The minute we elected Obama, the betrayal of Israel was set in stone:

An Israeli television network reported Sunday night that Valerie Jarrett, senior adviser to President Barack Obama, has been holding secret talks with the head of Iran’s Atomic Energy Organization, Ali Akbar Salehi, and that the international negotiations underway in Geneva are merely a “facade” covering up a deal whose terms have already been decided.

The report on Israel’s Channel 10 quoted unnamed senior Israeli officials who said that the talks, which have reportedly been underway for a year, have been held in various Persian Gulf states.

Note to Israel: Obama is not your friend and he never was. He has cost you dearly in the time needed to take down your enemy before they strike you. It is to America’s great shame that you now stand alone. But you will never be alone as long as God is with you. Your enemies will be the ones to pay a heavy price in the end.