Well, well, well…[1] look who got caught red-handed spying on our most loyal ally and in the process spied on Congress as well. Someone has been a naughty little tyrant. Barack Obama agreed two years ago to stop spying on friendly heads of state, but evidently he didn’t include Israel in that agreement. Nope. He put Netanyahu and Israel at the top of his NSA spy list. He did this to protect Iran, who Obama grovels before and answers to unapologetically. That senior US official is right – they are being accused of spying on Congress and Jewish groups. We all knew it was happening, but now the cat is out of the bag for real. White House officials believed the intercepted information could be valuable to counter Netanyahu’s campaign against Iran. They also recognized that asking for it was politically risky. So, wary of a paper trail stemming from a request, the White House let the NSA decide what to share and what to withhold, officials said. “We didn’t say, ‘Do it,’” a senior U.S. official said. “We didn’t say, ‘Don’t do it.’” Oh my. 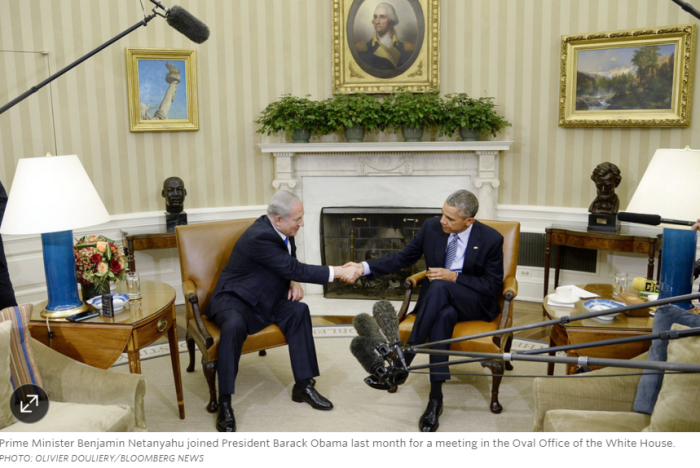 From the Wall Street Journal:

President Barack Obama[3] announced two years ago he would curtail eavesdropping on friendly heads of state after the world learned the reach of long-secret U.S. surveillance programs.

But behind the scenes, the White House decided to keep certain allies under close watch, current and former U.S. officials said. Topping the list was Israeli Prime Minister Benjamin Netanyahu.

The U.S., pursuing a nuclear arms agreement with Iran at the time, captured communications between Mr. Netanyahu and his aides that inflamed mistrust between the two countries and planted a political minefield at home when Mr. Netanyahu later took his campaign against the deal to Capitol Hill.

The National Security Agency’s targeting of Israeli leaders and officials also swept up the contents of some of their private conversations with U.S. lawmakers and American-Jewish groups. That raised fears—an “Oh-s— moment,” one senior U.S. official said—that the executive branch would be accused of spying on Congress.

Of course these officials are trying to make Israel look bad and say they were spying on us. Why shouldn’t they? The US is acting like an enemy towards Israel. They have no choice but to do everything they can to protect themselves from the likes of Barack Obama. What would you expect them to do? Stepped-up NSA eavesdropping revealed to the White House how Netanyahu and his advisers had leaked details of the US-Iran negotiations to undermine the talks; coordinated talking points with Jewish-American groups against the deal; and asked undecided lawmakers what it would take to win their votes, according to current and former officials familiar with the intercepts. I ask again, so? Obama has done far, far worse. Obama is blaming some of this on Edward Snowden. Any scapegoat will do in such a situation. More from the WSJ: “In closed-door debate, the Obama administration weighed which allied leaders belonged on a so-called protected list, shielding them from NSA snooping. French President François Hollande, German Chancellor Angela Merkel and other North Atlantic Treaty Organization leaders made the list, but the administration permitted the NSA to target the leaders’ top advisers, current and former U.S. officials said. Other allies were excluded from the protected list, including Recep Tayyip Erdogan, president of NATO ally Turkey, which allowed the NSA to spy on their communications at the discretion of top officials.” That’s going to tick off Obama’s bud Erdogan royally. “Privately, Mr. Obama maintained the monitoring of Mr. Netanyahu on the grounds that it served a “compelling national security purpose,” according to current and former U.S. officials. Mr. Obama mentioned the exception in his speech but kept secret the leaders it would apply to.” Just wow. If this doesn’t prove Obama’s hatred and distrust of Israel, I don’t know what will.