SHOCK: Guess What Comes Up When You Google Map Search for ‘Death To The Jews’?

Guess what happens[1] when you search for the term “death to the Jews” on Google maps in English or Hebrew? You are taken to the Temple Mount in Jerusalem. It came as a shock to social media users when this was discovered last night. The Temple Mount is the holiest site in Judaism and the third holiest in Islam. The recent clashes[2] across Israel are believed to have been caused by confrontations on the Temple Mount that began during the Rosh Hashanah Holiday in September. So, it is a bit alarming to find Google furthering the conflict this way. But not really surprising. 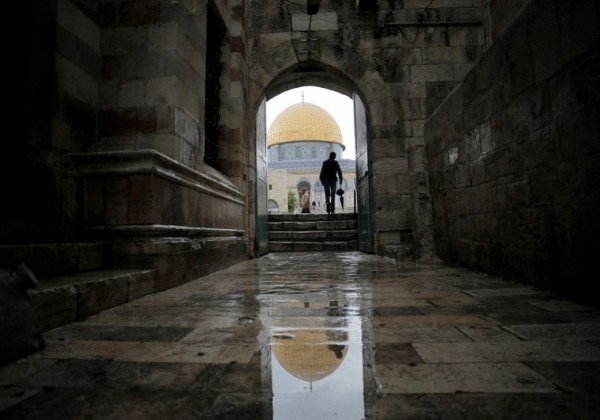 A visitor walks toward the Dome of the Rock as he enters the compound known to Muslims as Noble Sanctuary and to Jews as Temple Mount, in Jerusalem’s Old City. (photo credit:REUTERS)

Social media users were aghast Saturday night after it was discovered that searching the term “death to the Jews” on Google maps directs you to the holiest site in Judaism — Jerusalem’s Temple Mount.

As of early Sunday morning, the genocidal slogan both in English and Hebrew landed map searchers at the same site. 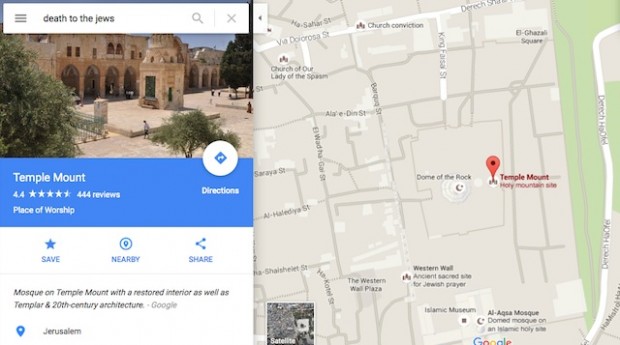 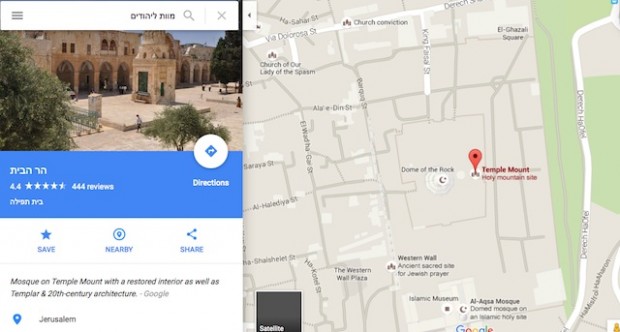 A search in Arabic found no results on the map search engine.

The Jerusalem Post observed[6] that the results appeared to be driven by the word “Jews” in the slogan, rather than the first more offensive part.

Indeed, a search using the word “Jews” only resulted in highlights for the locations of Temple Mount and the adjacent Western Wall. 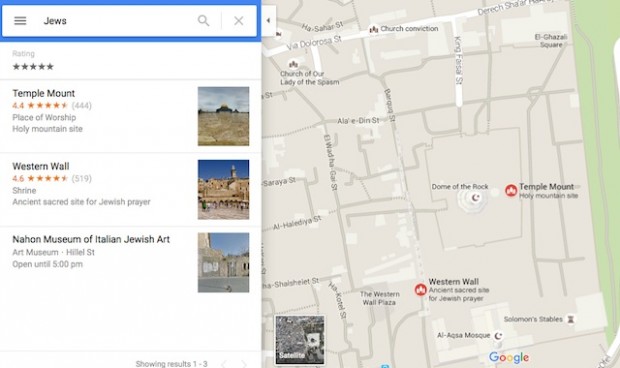 The Temple Mount was once the location of Solomon’s Temple, which was detailed extensively in the Bible, as well as the Second Temple, both of which were destroyed in antiquity.

The Al-Aqsa mosque which is situated on the Temple Mount is the third holiest site in Islam, after Mecca and Medina in Saudi Arabia. 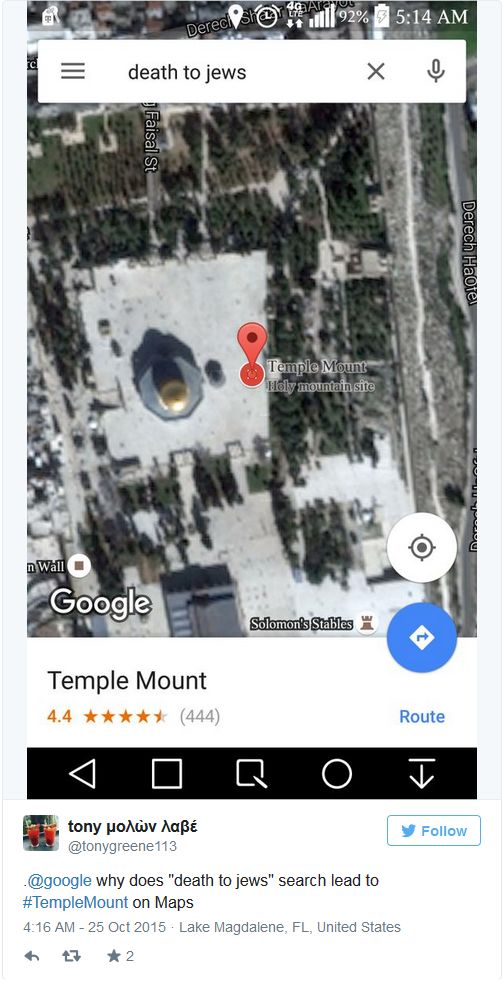 A wave of violent attacks[11] on Israelis which began last month has been driven by erroneous claims by the Palestinian leadership that Israel intends to change prayer arrangements on the Temple Mount known as the status quo.

Israeli Prime Minister Benjamin Netanyahu has said repeatedly that Israel has no plans to change the status quo according to which Muslims are allowed to pray at the holy site, while Jewish, Christian and other non-Muslim visitors are allowed to visit, but not pray or carry religious texts.

Netanyahu last week complained that social media has been fueling[12] the violence, as Palestinians are sharing widely images and cartoons that glorify[13] knife-wielding and other assailants.

Social media is playing a huge part in encouraging potential and actual attackers who are going after Jews wherever possible. It provides videos, photos and hate speech that is used to incite, recruit and instigate those that would murder Jews for perceived transgressions and because of lies put out by radical Islamists. The UN suspended several UNRWA employees last week after UN Watch exposed that they were inciting violence against Israelis and Jews on social media. UN Secretary-General Ban Ki-Moon announced Thursday that the UNRWA staff members inciting anti-Semitic and anti-Israel violence on Facebook “have been subject to both remedial and disciplinary action, including suspension and loss of pay.” That’s basically a slap on the wrist and not sincere in the least. There is no love lost for Israel at the Jihadist-loving UN. It does show how social media and the UN are supporting the Palestinians and how much they hate Israel though.