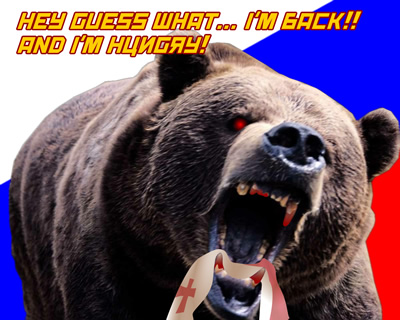 Perhaps this is part of Obama’s post-election flexibility — gifting Egypt to Russia. It’s a twofer… it pays homage to Putin and puts Egypt in their place for dissing the Muslim Brotherhood. While it may look to Egypt as if this is purely their choice, they are merely a pawn in a global realignment of power. Russia is back with a roar and the bear is hungry for geopolitical power. This time they have a new comrade in Obama[2]:

Russian President Vladimir Putin will visit Egypt later this month as part of a push by Moscow to replace the United States as the Egyptian military’s main patron.

The visit will take place after the Obama administration last month angered Egypt’s military by cutting deliveries of U.S. military arms and aid at a time when the military-dominated interim government is engaged in battles against Islamist terrorists in the Sinai Peninsula, and an insurgent Muslim Brotherhood opposed to the ouster of President Mohammad Morsi last summer.

According to U.S. officials, Putin will visit Cairo where he is expected to announce a major arms sales package as part of efforts to build closer military relations.

It would be the first time since the 1970s that Moscow will regain the foothold it lost in its close ties to Egypt when Egyptian President Anwar al Sadat expelled Soviet military advisers and ended purchases of Russian arms.

Russia is using her proxies in the Middle East to swallow Arabic countries whole for their resources and military possibilities. The Islamists and Communists are willing allies, figuring that each of them will win in the end. So, Putin leaves the terrorism to the Islamists who create chaos and unrest and the Russian military sweeps in to take over countries from within or without and pick up the pieces that benefit the Motherland. This is nothing new and is an old strategy used by the Ruskies. Patience comrade.

This Egyptian play also endangers Israel and their safety. I can just see Obama rubbing his hands in glee over this development and the hoped for demise of Israel[3]:

Moscow is known to be seeking new bases and allies in the region as its foothold in Syria was undermined by the civil war there.

U.S. officials said the Egyptians publicly are playing down the planned shift by the military from the United States to Russia.

The shift is being described by Egyptian officials as a rebalancing of relations and a diversifying of its military hardware suppliers.

Retired Air Force Lt. Gen. Thomas G. McInerney said the administration’s failure to back the Egyptian military is undermining 60 years of diplomacy that made Egypt a lynchpin of the Arab-Israeli Peace Treaty.

“By terminating our annual modernization and aid to the Egyptian military we are jeopardizing the peace treaty, weakening their military, endangering our preferred rights of overflight and the transiting of the Suez Canal,” McInerney said in an email. “Furthermore Gen. al Sisi is the first Arab leader to take on the Muslim Brotherhood overtly.”

The United States needs to support al Sisi and the interim government in the interest of regional stability, he added. “Israel desperately needs them backing the peace treaty,” McInerney said.

“Now the administration is about to let Egypt be under the hegemony of Russia with Russian Ports, which is unbelievable,” he said.

U.S. officials said there are indications the Russians also may be seeking an agreement with Egypt to set up a military base in Egypt to replace its now-threatened naval base at the Syrian port of Tartus.

Putin told Russian television in September that he supports stability in Egypt as soon as possible and promised that Russia would “facilitate this in every way.”

Oh… I bet Putin will “facilitate stability.” Russians tend to do that with bullets and bombs. If you get out of line, they kill first and ask questions never. Egypt may well go from theocratic rule, to communist rule. Both are deadly, but under communism, the Egyptians will return to abject slavery. A Russian Pharoah crowned in bearskin. The Russian bear’s leeway includes Egypt thanks to the US and the conquering of the Middle East progresses right on schedule.