The Mayor of Jerusalem found himself in the right place at the right time recently. Not only did he see a terror attack happening right in his own city, but he took action to prevent it – and it was caught on video! TheBlaze reports: 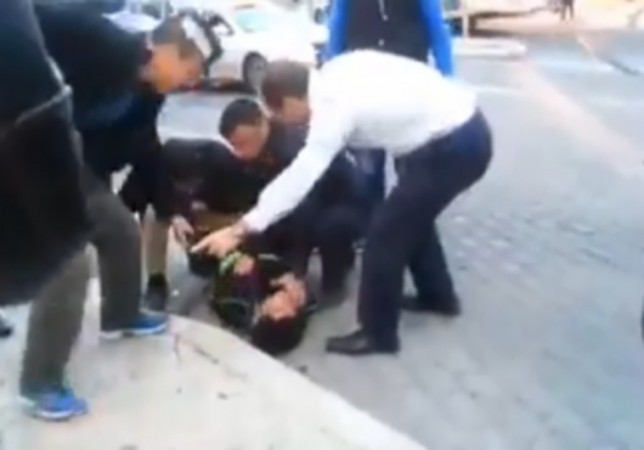 A security camera in Jerusalem captured the moment Sunday when the mayor of the city, Nir Barkat, crossed paths with a knife-wielding Palestinian who reportedly had just attacked a Jewish man and was apparently looking for more victims.

The mayor, accompanied by his bodyguards near Jerusalem’s City Hall, lunged at the man the mayor called a “terrorist” and subdued him.

Israeli media reported that Barkat could be seen in this video wearing a white shirt and lunging at the reported stabber who was standing in the intersection.

“[W]hen I was on my way to the office for a meeting, while we were at the junction right next to City Hall, my driver and my team noticed something happening in the junction,” Barkat told reporters two hours later. “So, I got out of the car with my bodyguard, and we approached the scene and noticed a terrorist with a knife in his hand.”

Barkat explained that his bodyguard cocked his pistol, which apparently prompted the Palestinian attacker to drop his knife. That was when Barkat and his bodyguards subdued him.

“Without thinking, my bodyguard took out his weapon, and when he aimed at the terrorist, the terrorist dropped his knife and we immediately tackled him to the ground to make sure that he could not continue with the terror attack,” Barkat said according to the Jerusalem Post.

Another video showed a close-up view of Barkat and his bodyguards around the stabbing suspect who was on the ground.

Barkat then went to help the stabbing victim, an ultra-Orthodox man who was moderately wounded according to police.

“It’s clear to me that if the terrorist had continued stabbing, he would not be alive right now,” Barkat said. “But because he dropped the knife we overpowered the terrorist.”

The mayor’s bodyguard who drew his weapon, Asaf Na’amani, told Ynet, “The mayor and I jumped on him and wrestled him to the ground. In our world, there’s no such thing as hesitation — there’s only yes or no.”

Police later identified the attacker as a 19-year-old Palestinian who was in Israel without a permit.

A Jerusalem Post reporter observed: “Meanwhile, after the press conference concluded, one attendee expressed the sentiments seemingly shared by most of the journalists in the room. ‘I guess this makes him Super Mayor,’ he said.”

Seriously, talk about fortunate timing! This man would likely not even be alive if not for this intervention. Super Mayor, indeed. What an amazing man to step in to help a constituent in need. Most certainly, this would not happen in America, especially under current administration.