Al Sharpton’s already-damaged reputation is about to take another hit. The activist that nobody wants to hear from is once again sticking his nose where it doesn’t belong and this time, he’s attacking Ivanka Trump[1]. 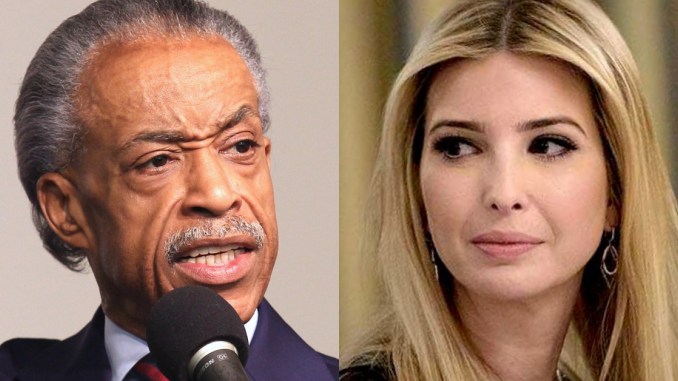 Sharpton railed against Ivanka being given a position in her father’s administration and compared her to Barack Obama’s daughters. “If President Barack Obama had given his daughters or his mother-in-law an office and some access to classified documents and cleared security status, they would have run him and everybody else out (of) the White House,” Sharpton argued. He was referring to Sasha and Malia Obama, and Marian Robinson, mother of Michelle Obama, who lived in the White House with the Obama family.

The fact that Ivanka will not be receiving a salary made no difference to Sharpton.

“Giving a office on the West Wing of Ivanka Trump, somebody explain to me how you can give security clearance, access to classified material, and a office to somebody that don’t have a title or job?” Sharpton said. “They say now she ain’t got no title. She ain’t got no role. We ain’t payin’ her no money. But she can see everything classified.”

Sharpton is far from the only critic of Trump’s decision to give Ivanka an office in the West Wing with access to classified information. Social media lit up with complaints after the news broke.

Ivanka into the White House? It’s like a coup, and the dictator’s family is moving into the palace as it prepares to the loot the country.

I had a security clearance & West Wing office. @IvankaTrump[4] diminishes the value of expertise & hard work it took me & others to get there. https://t.co/rRVzDfR53d[5]

However, despite the complaints, Ivanka’s lawyer says that the ethics of the situation have been resolved. Jamie Gorelick announced that the Justice Department’s Office of Legal Counsel agreed that the president can “consult with family members as private citizens” and that this is what Trump plans to do with Ivanka. “Our view is that the conservative approach is for Ivanka to voluntarily comply with the rules that would apply if she were a government employee, even though she is not,” Gorelick said. “The White House Counsel’s Office agrees with that approach.”

Do you agree with Al Sharpton, or do you support Donald Trump?